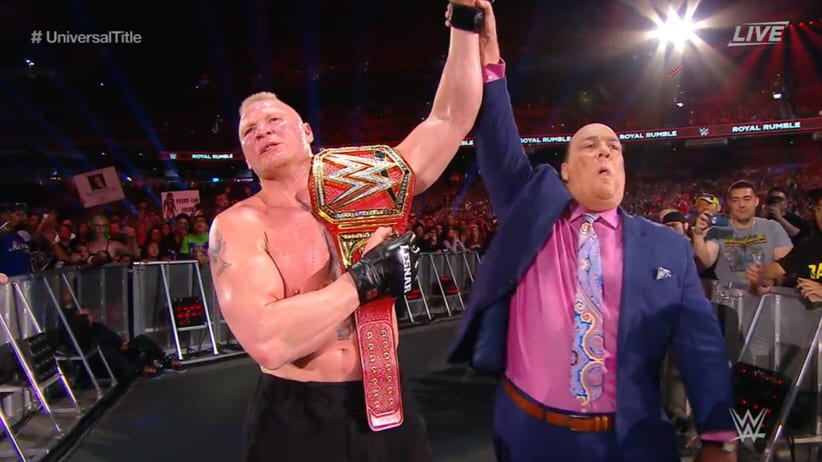 Finn Balor came out during the WWE Royal Rumble to face Brock Lesnar as himself and not The Demon. It was a true David and Goliath story, especially when you looked at the tale of the tape.

Finn Balor walked into the Royal Rumble undefeated in his WWE main roster career in pay-per-view singles matches, but that changed in Phoenix.

Balor took it to Lesnar as soon as the bell sounded with a dropkick and a series of kicks from the apron. Brock Lesnar was shook and so far Balor was doing way better than Braun Strowman did in Saudi Arabia against The Beast Incarnate.

Then Lesnar hit a belly to belly suplex and started picking his opponent apart from there. Lesnar dismantled the announce table and tried to slam Balor through it, but Finn broke free and shoved Brock against the corner of the announce table twice. Then Lesnar landed a knee to create some seperation.

Lesnar was selling his stomach as Corey Graves brought up The Beast’s previous battle with diverticulitis. He carried on to fight Finn, but Lesnar continued to sell his stomach.

Brock continued handling Balor with to belly suplexes and then suddenly, he couldn’t carry on as he failed to hit another German suplex. Then Balor turned an F5 into a DDT and got a two count.

Balor fought back and hit a dive on Lesnar followed by another one and then a third. He went in the ring and allowed Lesnar to come back in before hitting a basement dropkick. Then Balor climbed up to hit a Coup De Gras for a very close two count.

Suddenly, Lesnar slapped on the Kimura and Finn Balor tapped out.

This ended Finn Balor’s undefeated streak in singles matches on WWE pay-per-view, but it was very close at times.