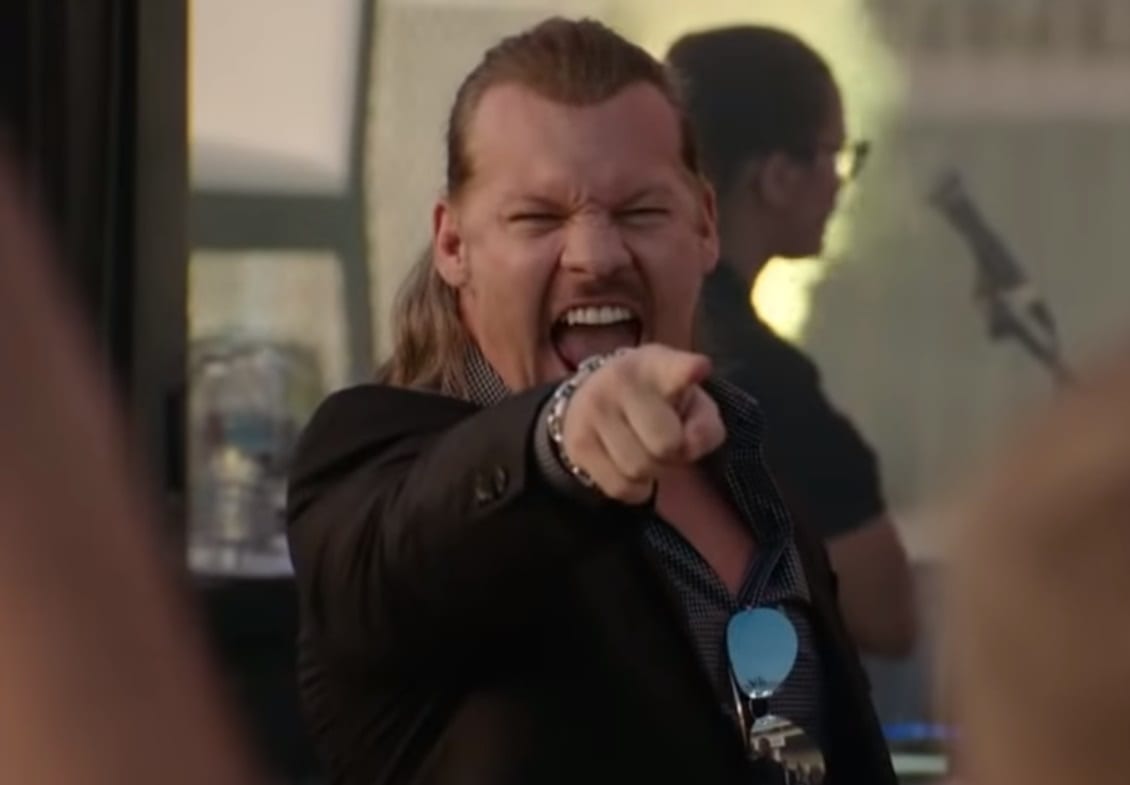 Chris Jericho surprised a lot of people when he signed with All Elite Wrestling, but Vince McMahon knew what was going on the whole time. Y2J spoke about keeping Vince up to date with all of his external commitments during Talk Is Jericho. It didn’t seem to cause WWE to offer Jericho a deal to convince him not to sign with Tony Khan’s new company.

Jericho said that after his WrestleMania match against Kevin Owens he left WWE to concentrate on Fozzy because he couldn’t juggle both. Their song Judas blew up like nobody expected it would and they saw a lot of success.

Then in the Summer of 2017, Y2J says he got a call from Don Callis about doing a match against Kenny Omega at the Tokyo Dome. Of course, Jericho eventually took the deal, but it wasn’t an easy decision to make. He hadn’t stepped for in a non-WWE ring since August 1999, but that changed with his angle against Kenny Omega.

Jericho said the deal with NJPW was made for a one-off match against Omega in a darkened meeting at the Royalton Hotel bar in NYC. Jericho said he got a piece of the pay-per-view buys from Wrestle Kingdom 12 as well so he worked extra hard to drum up interest. Then he had a phone call to make with Vince McMahon.

“So that’s basically how it went. Once the deal was done I made a call to Vince McMahon. I remember we were on tour with Fozzy I think it was probably October or November at this point in time. We were in Wilkes Barre Pennsylvania kinda playing a hotel ballroom.”

“We always had VIP at 3:30, I told them we would have to move it back to 4:00 because I had a call with Vince at 3:30. I told Vince McMahon I was gonna go work this match at the Tokyo Dome for New Japan Pro Wrestling. He was very accommodating, very excited about it. He thought even if you’re working for New Japan everybody’s knows you’re a WWE guy and I was like it’s just going to make me a bigger star when I come back.”

After Jericho vs Omega’s 5-star match was said and done, they sold a ton of seats and subscriptions for New Japan World sky-rocketed. Y2J realized that he loved NJPW and the freedom they gave performers. He didn’t knock WWE, but Vince McMahon is the boss there so everything must go through him. NJPW is more “wild west” and Jericho liked it so he agreed to work more in Japan.

Jericho said he wanted to do something with Tanahashi, but Gedo suggested Naito because he was complaining about sharing a double main event. Jericho said he did his New Years Dash angle with Naito for free with plans to make another deal later on.

“When I got back I got a call from Vince McMahon asking me why I attacked Naito. ‘I thought it was just a one-off.’ I was like, ‘Well it is just a one-off for now. I might do more with New Japan. If I do I will definitely let you know because I wanna run everything past you and make sure you’re cool with it. If nothing else, at least I left New Japan with my heat. If nothing happens at least I left with my heat.'”

Then Y2J said he signed a new three-match deal with NJPW and Vince McMahon called him to do the Raw 25 special. Jericho said he didn’t want to do it. He said he wouldn’t go to the ring so he did something backstage with Elias instead. He didn’t want to do the Greatest Royal Rumble either, but then the offer was “ridiculous” and in his top 10 biggest pay-offs ever to do three minutes as the #30 entrant.

The plan for the Greatest Royal Rumble was for Jericho to face The Undertaker in a casket match. Then Jericho called Vince back and told him about the three-match deal. Y2J said he wasn’t besmirching WWE for New Japan, but the response from McMahon wasn’t as positive and he could tell that he was worried about three matches. Then three hours later, Jericho got a call saying that Rusev was back in the casket match and Y2J was out.

Jericho was told that “The Prince wants the Rusev/ Undertaker match,” but he knew differently.

After winning the IWGP Intercontinental Championship, he called Vince McMahon and pitched a SummerSlam IC Champion vs IC Champion match vs Seth Rollins. Vince didn’t want to do it even with a non-finish and never called Jericho back.

Chris Jericho worked on his cruise for three years and he wanted NXT to be a part of it, but they passed. ROH agreed to help out and The Young Bucks were the first act to sign up followed by Cody. Jericho said Kenny Omega joined up too and they all started a group text and became friends.

Then Y2J started hearing about Tony Khan through his agent Barry Bloom. Jericho was told that Khan wanted to start a professional wrestling company and wanted Jericho to meet with him. Y2J didn’t think he was going to work there, but maybe he could give some advice.

Then Jericho heard about ALL IN selling out the Sears Centre. Cody contacted him and asked if he could work ALL IN, but Y2J didn’t know if he wanted to work in the USA against WWE.

At about this time, WWE signed new television deals worth a combined $2 billion for the next five years. Vince McMahon called Jericho again about going to Saudi Arabia, but he had Fozzy commitments in Japan. Jericho said he could technically do it, but he would need a private jet to Osaka. Then McMahon never called him back.

Vince McMahon not getting back to Chris Jericho about things was becoming a trend. Y2J had previously agreed to replace Shane McMahon and be Daniel Bryan’s WrestleMania partner in a big surprise, but he never got called back for that either. This was becoming a pattern and Chris Jericho started to think, “It must not be a big deal.”

Then Jericho asked Cody Rhodes what his idea was for ALL IN and he loved the idea so it happened. Chris attacked Kenny at ALL IN while dressed up like Pentagon Jr and then got back to do a Fozzy gig that night on a private jet provided by Tony Khan. Providing a private jet was something that WWE apparently wouldn’t do. After that, Y2J sat down and had a four-hour meeting with Tony Khan.

Jericho said the initial offer from Tony Khan was like “a real NHL offer” and he said that appearing at ALL IN was meant to be a message for WWE. Jericho was enjoying himself and didn’t know how WWE would use him either.

Y2J said he was interested in continuing with New Japan and there are plenty of amazing matches he could have. Jericho vs Kevin Owens was a focal point in WWE, but they only got the second match on the card and he didn’t think that they got the treatment they deserved.

Jericho said that he thought very hard about working with Impact Wrestling as well. He said they were going to spend some money on Y2J and let him work with Sami Callihan, Johnny Impact, Brian Cage, and Rich Swann. Then Tony Khan came in with the biggest offer Jericho has ever received in his entire career. Still, it was a hard decision to make.

“I’d worked for WWE for 19 years, love WWE, but then I put myself in Chris Jericho’s shoes back in 1998 when I was contemplating leaving WCW and thinking, ‘How much further can I go in WCW under these rules, under these conditions?'”

You have to wonder if Chris Jericho’s decision would have been different if WWE would have taken him up on his SummerSlam idea or provided a jet to Osaka Japan from Saudi Arabia. They also could have given him the courtesy of a phone call to let him know Shane McMahon was working WrestleMania anyway.

Either way, Jericho is AEW now and that won’t change for the next three years. You never know what could happen next, but with Y2J around you never really know what to expect.