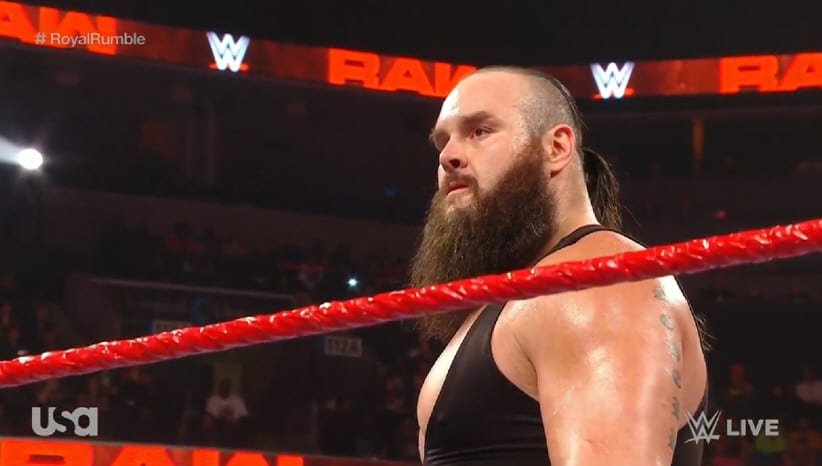 WWE RAW kicked off with a very interesting turn of events. Now the Royal Rumble will need a new title match.

Braun Strowman kicked off the show and came to the ring. He said that Brock Lensar has always been afraid him since he was the Monster In The Bank and then he said that Brock had Baron Corbin screw him over at the WWE Crown Jewel event.

Then Braun said he is all healed up and Brock Lesnar is going to get those hands at Chase Field at the Royal Rumble pay-per-view. Baron Corbin walked out and Strowman got a “You got fired” chant going toward Corbin.

Baron said all Braun does is let people down. After Corbin said he was going to the main event at WrestleMania after winning the Royal Rumble match, Baron ran and Braun chased him backstage.

Elias started singing to Braun and then played along the acoustic soundtrack as he pointed out that Baron was in a limo. Then Braun Strowman took a lead pipe and smashed the windows out of the limo. He tore the door off and then Baron got out of the other side and kept running.

Suddenly, Vince McMahon was standing there. It was his limo and he was not happy at all. Vince said Braun is a “danger zone” and he said this infraction will cost Strowman $100,000. Braun said “this piece of crap isn’t worth $100,000.

Then Vince McMahon pulled Braun Strowman from his Universal Title match against Brock Lesna at the Royal Rumble. Just like that. Don’t upset Vince McMahon.