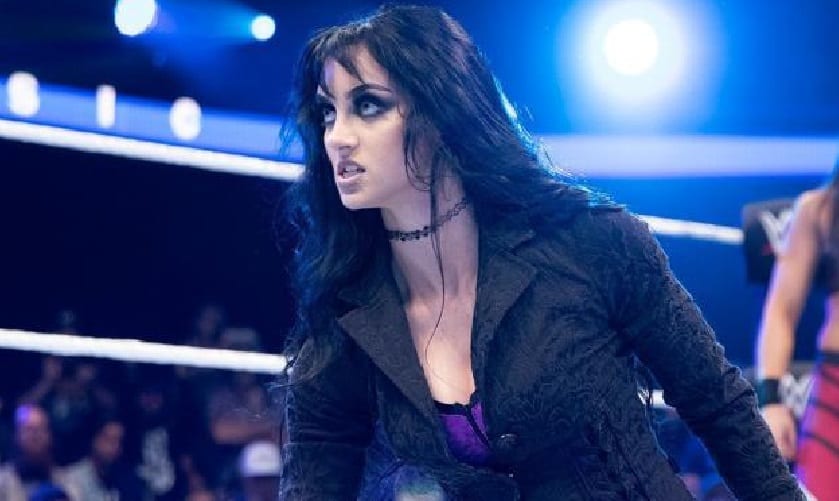 Priscilla Kelly really drew a lot of attention to herself recently when she was wrestling a woman named Tuna and then Kelly “pulled out” a tampon only to shove it in Tuna’s mouth. This was staged and not a real used hygiene product, but the internet still blew up about it.

While speaking to The Shining Wizards, Kelly commented saying that she didn’t expect this kind of negative backlash over her spot. She didn’t want to shock the world either, she just thought it would be funny.

Kelly competed in the WWE Mae Young Classic before, it will be interesting to see if they bring her back. When asked if she had a worry about what WWE thought about this spot, she had a pretty interesting opinion. She isn’t worried because there are plenty of other places to wrestle even if WWE never calls again.

“Honestly, no.  I don’t think it blew any chance.  I mean, if it did, there’s plenty of other opportunities in the world of professional wrestling for me.  There’s plenty of other ways to make money in this business. Would I like to go to WWE? Yeah, I’d love to go to WWE.  I’d like to go anywhere. I like making money. I like expanding my horizons. I like showing off my work on very large platforms.”

“At the same time, no, I don’t think it really could have harmed me because I think a lot worse things that have happened.  Not only on TV, but I think there are a lot worse things that have happened privately in wrestlers’ lives. These things are very public, and I think what I did,  it’s simply a stunt at the end of the day. There’s no cruelty behind my actions, and I think that is the most important aspect.”

We will just have to wait and see if WWE calls Kelly again, but if they do there’s a pretty strong chance that they will not allow her to duplicate her previous tampon antics in their ring.