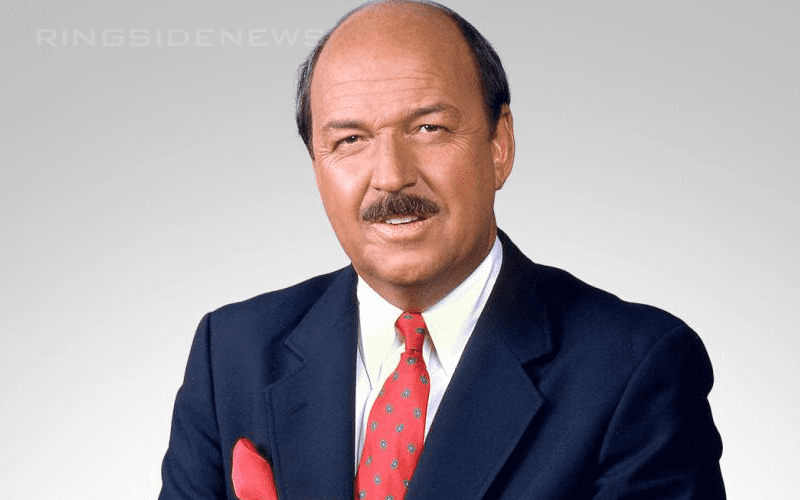 The Dignity Memorial published the obituary for “Mean” Gene Okerlund, which you can check out below.

Eugene Arthur Okerlund passed away on January 2, 2019 at Sarasota Memorial Hospital in Sarasota, FL. Gene was born in Brookings, South Dakota on December 19,1942 to parents Arthur and Helen Okerlund (deceased). Gene grew up in Sisseton, SD and graduated from Sisseton High School in 1960. He was an all-around athlete playing basketball, baseball, football and track. He was also an incredible musician, playing with the Harold Johnson Orchestra and then his own band, Gene Carroll and the Shades. He enrolled at the University of Nebraska to study journalism, and left after his first year to pursue a career in radio broadcasting. He began his working career as a radio disc jockey. He married his wife, Jeanne Okerlund in March of 1964. Gene and Jeanne moved multiple times in the late 60s for DJ gigs all over the country in markets from Flint, MI to Winston-Salem, NC. In 1967 they settled in Minneapolis, MN where they raised their two sons, Todd and Tor.

Gene was driven to succeed and advanced his career by moving into selling advertising for WTCN TV in Golden Valley, MN in the early 1970s. It was at WTCN TV that Gene got his first break as a wrestling announcer when Vern Gagne of the AWA asked him to fill in for a missing announcer. His wrestling career grew from that point on. During his career as a wrestling announcer he also became a partner at Cohen Okerlund Smith Advertising in Minneapolis. Gene worked for the AWA until 1984 when he began working for World Wrestling Federation, which eventually became the WWE. Gene continued to work right up until he became ill. Gene recorded his last show in December of 2018. Gene was recognized for his contributions in creating the industry leading WWE with his induction into WWE’s Hall of Fame in 2006. He truly loved his career!

He had many friends in life and enjoyed spending time and socializing with them. Gene cherished his wife, Jeanne, who was by his side when he passed away. He also loved boating and spending time during the summer at his cabin on Big Sandy Lake in northern Minnesota. He lived a very full and happy life, residing for many years in Sarasota, Florida.

Gene is survived by his wife, Jeanne; sons, Todd (Patricia) of Phoenix, and Tor (Dana) of Hudson, WI; and grandchildren, Henry, Arthur and Brady.