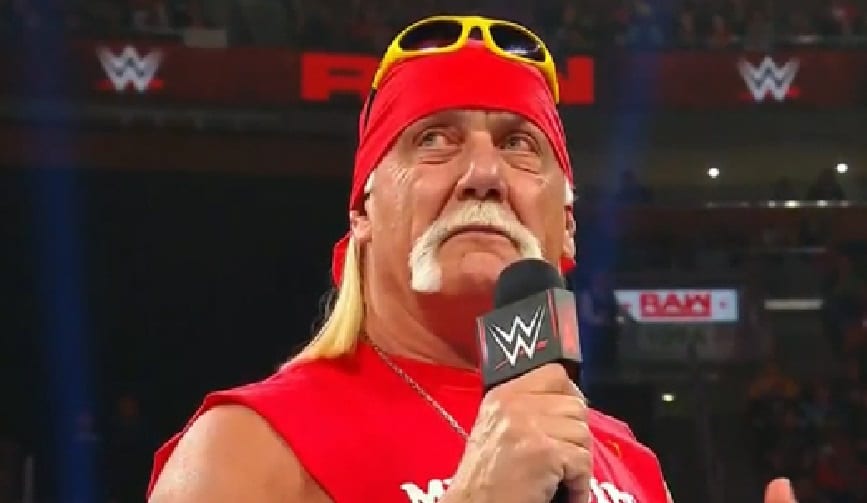 Hulk Hogan has been seen on RAW in years and only appeared at the WWE Crown Jewel event. He made his return to RAW tonight in Orlando to remember “Mean” Gene Okerlund.

The crowd was happy to see Hogan and popped pretty big for him, although it’s arguable that the pop wasn’t what it once was.

There was a loud and sustained “Hogan” chant before he started with, “Well, let me tell you something, brother.” He said that he came out in character because “Mean” Gene Okerlund would have wanted it that way. Then he got down to business talking about “Mean” Gene.

When Hogan lifted his sunglasses, you could see his eyes were red and it looks like it might have been very emotional. Then he introduced an incredible video package for “Mean” Gene Okerlund. We previously reported this package was on the way.

Then Hulk Hogan cut a promo on “Mean” Gene saying that he was with commentating a match between Roddy Piper and Macho Man with Andre The Giant as a special referee. He name dropped Gorilla Monsoon and Bobby Heenan as well as Fabulous Moolah and Mae Young.

Hogan wrapped it up saying, “What ya gonna do when Mean Gene-o-mania runs wild on you, brother?”

Then Hogan posed while the crowd continued to pop and the camera zoomed in on a memorial for “Mean” Gene Okerlund.