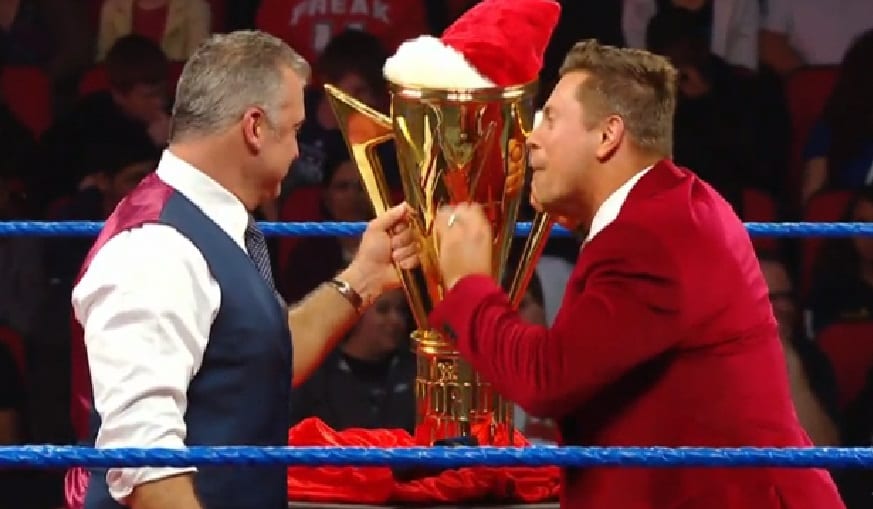 WWE’s Christmas Day episode of SmackDown Live included the formation of a new tag team. Apparently, The Miz and Shane McMahon are going to try things out and form a unit. They sealed it with a hug and a bunch of Yes chants, but WWE didn’t really drive home the groundwork of their connection.

Dave Meltzer explained on Wrestling Observer Radio how The Miz was able to connect with Shane McMahon’s desire to constantly keep his father Vince McMahon happy. The idea of The Miz never making his own father happy was a focal point of the promo that caused Shane to finally give in to The Miz’s wishes.

“The psychology of that is and they didn’t even spell this out on the announcers or anything. I don’t know if you’re supposed to figure it out or not, but the idea is that Shane, you know how Shane does all this crazy stuff so Vince will be proud of him and you know Vince just never shows it. So it’s like Miz was basically saying everything and Shane was saying, ‘God I relate to this’ and he actually did kinda say he related to it.”

“It wasn’t really spelled out well enough, but that was the idea.”

Perhaps WWE would have been wiser to drive home this storyline point. However, they might not approach it and just leave it there for the viewers to figure out. After all, WWE might not want too much focus to be brought to the fact that Vince McMahon’s son wants nothing more than his father’s approval which he has yet to receive in real life.