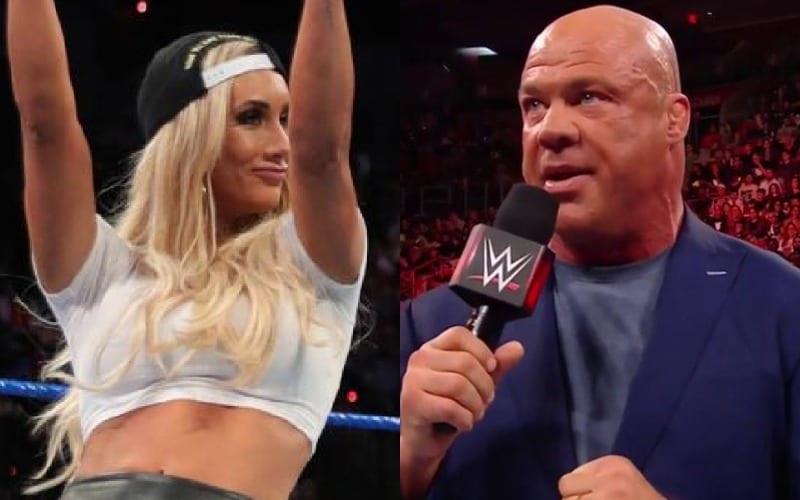 Carmella and R-Truth are lighting it up with dance breaks on SmackDown Live and the crowds seem to be rallying behind her new gimmick. It will be a lot of fun to see how their vacation to Stamford Connecticut turns out too.

The Princess Of Staten Island recently spoke to Metro UK, where she revealed how WWE Hall Of Famer Kurt Angle actually gave her a lot of inspiration. You wouldn’t normally consider Angle and Carmella as having that much in common, but that is not the case at all.

“Something I took away from Kurt Angle’s Hall of Fame speech was never be afraid to make a fool of yourself and don’t take yourself too seriously, I really let that sink in and ran with it. In my career I’ve had several different paths and character turns.”

“I was a manager in NXT, then I was the last draft pick and then with James Ellsworth as a champion. I feel it’s important to show different sides of my character and I never take myself too seriously. Some people take themselves way too seriously, but it’s WWE – the E stands for entertainment and that’s what I want to bring to it. Anyone can go out and have a match but it’s a matter of connecting with the fans and making them react one way or another, whether it’s making them laugh, or get mad, or be happy. You’ve got to make them feel some sort of way. Whatever it is I have to do to achieve that, I want to do the best I can.”

Carmella was able to take that inspiration from Kurt Angle and really turn it into something special that she still uses till this day. It just goes to show that you never know when you’ll get hit by that one piece of inspiration that will go on to change the way you think from that point on.