Several Superstars from NXT will be getting their main roster call-ups over the next few weeks. While Lars Sullivan was already expected to be called up- given the promos that started airing at Survivor Series, the other five Superstars that were confirmed on RAW were all a surprise to fans.

The only tag team featured in this list of call-ups is Heavy Machinery- the team of Otis Dozovic and Tucker Knight. These two Superstars pack a punch in the ring but are some of the funniest guys around. Perhaps not surprising, given his nature, it seems Dozovic is confused as to what brand he and Knight will be working for.

When he was announced as a main roster call-up on RAW, Dozovic took to his Instagram to seemingly announce he and Knight would be headed to the red brand. You can see this in the image we have below: 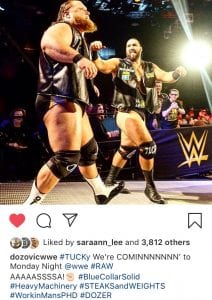 While that tweet could certainly be seen as Dozovic confirming which brand he may be headed to, he would follow it up after SmackDown Live last night with another post suggesting he and Knight would instead be heading to the blue brand. This time around, Knight had a response for his partner… who played it off like this was a test. 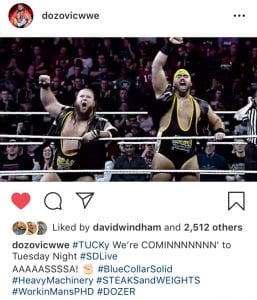 While WWE has yet to confirm what brand Heavy Machinery will go to, they will likely set themselves apart from other teams with their comedic attitude and hard-hitting style in the ring. Be on the lookout for them, alongside Sullivan, EC3, Nikki Cross, and Lacey Evans within the coming weeks.

What brands are you thinking each call-up will go to? Who would you call up if you had the opportunity to decide? Let us know your thoughts, opinions, and reactions in those comments below.