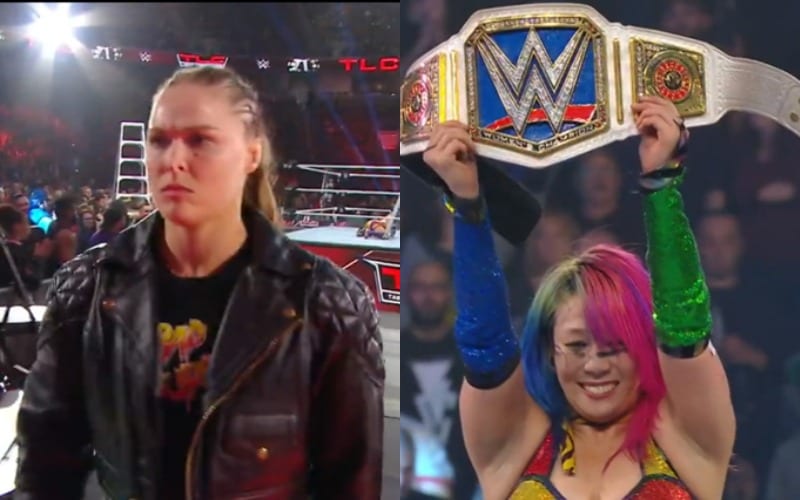 Becky Lynch vs Charlotte Flair vs Asuka in a Tables, Ladders, and Chairs match was the only way to main event WWE TLC in San Jose.

Asuka almost won earlier in the match after she sent Becky Lynch onto a ladder and then put Flair through a table, but The Man dropkicked her off of the ladder preventing her from reaching the prize. Flair soon came alive and hit a moonsault off the top turnbuckle to the floor on Lynch and Asuka before setting up a table on the outside. Then Becky unloaded on Flair and Asuka with a chair to halt that table spot for the moment. Flair also got around to dismantling the German announce table too.

Lynch grabbed a giant ladder and placed both Asuka and Flair on the announce table. Then The Man climbed up to the top and performed a dangerous legdrop. Asuka moved, but Lynch ended up right on top of Flair. It was brutal and the table broke wrong. Flair looked seriously hurt, but Asuka was okay.

The Empress Of Tomorrow went climbing up the ladder to the SmackDown Women’s Title, but Becky Lynch met her on top of the ladder to stop her. Suddenly, Flair was there with a kendo stick and went off on everyone, especially Asuka.

Lynch nailed a Becksploder suplex on Flair that bounced her off of a table against the barricade while Asuka went off on her with a kendo stick. Suddenly, Charlotte Flair speared Asuka through the barricade at ringside.

Flair and Lynch ended up in the ring and they both wanted to climb the ladder to get the title. Flair chopped Lynch while The Man fought back. Becky bounced Charlotte’s head off the ladder before tackling her and then the two rolled outside to brawl some more.

Then Flair laid Lynch across the table she previously set up and climbed to the top turnbuckle. Flair hit a somersault dive through the table and take out Becky Lynch in the process.

Suddenly, Ronda Rousey walked down to the ring and pushed the ladder with both of them over. She got booed like crazy for it too.

As Rousey left, Lynch and Flair rolled out of the ring and Asuka climbed up the ladder to claim the SmackDown Women’s Title to become the new champion.