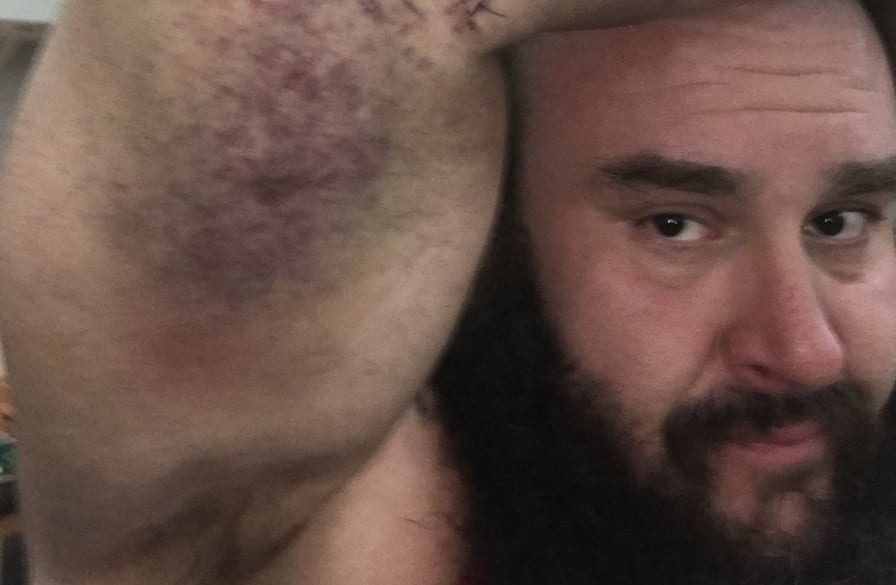 Braun Strowman is out of action right now after he required an elbow surgery to remove bone spurs that were giving him a very bad time. Now he is recovering from that surgery, but a return date of December 16th for WWE TLC is definitely his goal even though his elbow might still be a bit of a mess.

The Monster Among Men tweeted out a picture of his surgically repaired elbow with a caption saying: “Eye for an eye!!! The Monster is coming!!!” He really sounds serious about this.

There are a number of things WWE could do if Strowman isn’t 100% ready by the time December 16th rolls around. One option could even include bringing Bray Wyatt back to pinch-hit for him. Strowman is focused though and seems ready to make Baron Corbin pay for what he did in the storyline that caused this injury.

Braun Strowman is still booked in a match against Baron Corbin at WWE TLC and WWE continues to promote it as happening. There are some pretty high stakes to this match as well. If Braun Strowman wins, then he gets a Universal Title match against Brock Lesnar at the Royal Rumble. Corbin has a lot on the line as well because if he wins the match then he will become the full-time RAW General Manager, but if he doesn’t succeed in defeating Strowman, then he will lose all power in WWE.

He has nine days to heel up if he’s going to be ready so he might be cutting it close. Either way, it looks like Braun Strowman will make sure Baron Corbin gets those hands eventually.