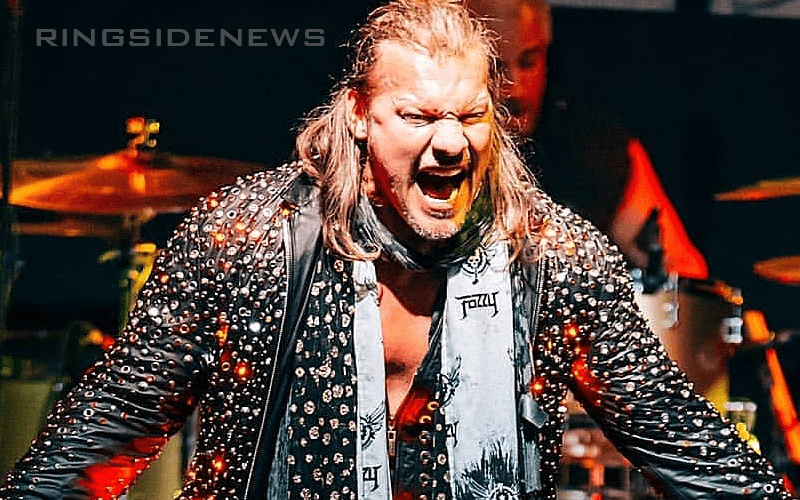 Chris Jericho might be a rock star on most days of the week at this point, but that doesn’t mean he can’t take care of himself if needed. It turns out that Y2J had to get pretty physical after a gig with his band Fozzy and the police needed to be called as well.

Jericho has a lot of passionate fans which he certainly appreciates, but one thing he doesn’t appreciate is people taking advantage of him. Therefore, when a guy who apparently did some work on the show tried to get onto the Fozzy tour bus and he wasn’t invited, Jericho had a big problem and he dealt with it.

Dave Meltzer described the events of the altercation during Wrestling Observer Radio as they were told to him. It sounds like there was quite a spectacle after the Fozzy show was over in Canada on Sunday night.

“He was in Regina Saskatchewan doing a show last night and after the show some messed up guy was back there wanting to get into the tour bus. There was apparently a kid helped play or did some drum work on the show and the kid wanted to get onto the tour bus or get autographs or something like that and this other guy said that he’ll get him on the tour bus.”

“So he tries to get him on the tour bus. I guess they don’t want him on and he ends up somehow sneaking on and one of the guys on the crew saw him and they got into a fight and the guy actually ended up with a broken collarbone because of the fight and then he gets kicked out.”

“Jericho’s yelling at him so Jericho gives him a spear and he’s pounding on him from the mounted position — I think it was a mount, he was on top. Nobody actually told me that so the guy may have had a guard or anything. So Jericho is on top of him and he’s punching him out and then he went back on the bus then he came back out and did it again and tries to tell the people — to not let him go.”

“The people who were there watching this tried to hold the guy until the police arrived and then he got away and the police came and the police chased him and the police ended up catching him so they did end up arresting him after the guy ran away. So that is the gist of the story of what happened last night.”

Chris Jericho is scheduled to wrestle at NJPW’s Wrestle Kingdom on January 4th where he will defend the IWGP Intercontinental Championship, so it looks like he got some extra practice in last night after his show.

Meltzer noted how awful it would be if Jericho injured his hand during this melee so he was hampered during his upcoming Wrestle Kingdom match against Tetsuya Naito, but even with a broken hand, Y2J would likely still wrestle.

Thankfully, Jericho wasn’t injured during this encounter. The same can’t really be said for the guy who tried to make himself at home on Fozzy’s tour bus though, but that’s what you get for messing with The King Of The World.