Randy Orton and Rey Mysterio hadn’t battled on SmackDown Live in 12 years but on the show after Survivor Series, the two wrestled and Orton won clean. But after the match, there was a post-match beatdown which included Orton unmasking the famous luchador.

Mike Johnson noted on PW Insider Elite audio that he will be surprised if WWE keeps this match in its entirety due to the fact that Rey’s face was shown.

“The highlight was Randy Orton basically playing a lucha heel by ripping at the mask and at one point he exposed all of Rey Mysterio’s face which I doubt that will ever pop up on the WWE Network replays. The idea was that Randy was going to destroy the fantasy of the mask.”

WWE uploaded a highlight video of the match, and while the ending spot remained intact where Orton unmasked Mysterio thanks to a chair around his neck, that spot was arranged to hide Mysterio’s head with the back of the chair when he hit the ground. So there is still a split second where his face is visible, which you can see as the headline photo of this article.

But WWE did in fact, edit the match extensively. They have been known to cut matches down to allow for shorter social media viewing, but a couple major spots were taken out, especially when Orton was tearing at Mysterio’s mask like a rudo from the lucha world. At one point he pulled at Rey’s mask after he had already torn at the eyehole and his mask pretty much came off all the way to expose his face right in front of the camera.

You can check out the clip below to see what we’re talking about, but you can also check out a screenshot that they cut out which clearly shows the front of Mysterio’s face as well which obviously hit the cutting room floor. 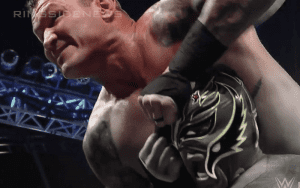 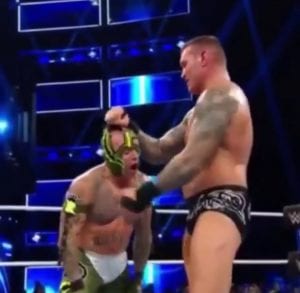