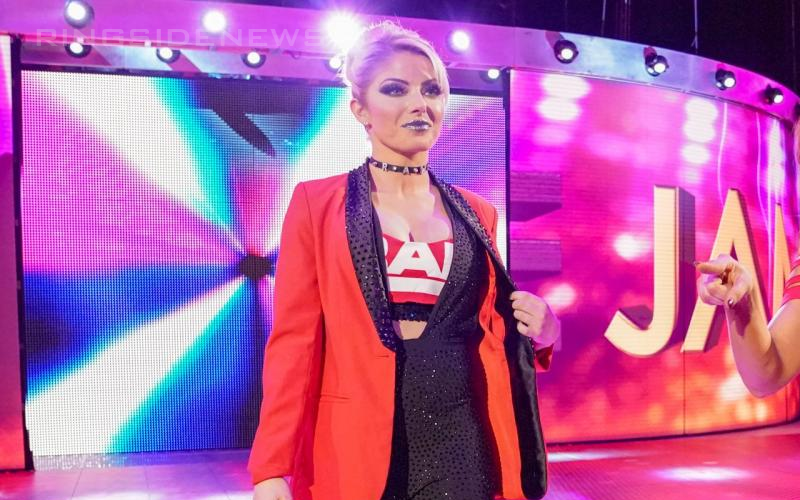 Alexa Bliss hasn’t been able to wrestle since she took a bad bump at a house show she was out of action for WWE Evolution and Survivor Series where she captained Team Raw’s Women to victory. But she’s still not wrestling.

Mike Johnson noted on PW Insider Elite audio that he’s heard talk backstage of Alexa Bliss being used in a very interesting role post-TLC which would give her much more authority.

“The impression that I have is that she went through some medical testing while she was in Los Angeles and that there was no clearcut indication that she was returning to the ring anytime soon. It doesn’t mean that it’s not going to happen. That’s to the best of my knowledge it’s not a Paige situation where she’s been permanently sat out, but it did seem like, ‘Ok in two weeks you’re going to be good to go, or in three weeks you’re going to be good to go.”

“It’s still very much up in the air. They’ll probably still keep testing her. There was some expectation backstage at Raw that when they come out of TLC Alexa Bliss will probably end up the General Manager of Raw which makes sense when you think about it but given how they change ideas so quickly I don’t know that definitely 100% the plan.”

He went on to note that if WWE went with this plan, it could have a huge upside to it because Bliss is a great talker and she knows how to get over with the fans. Also, the idea of Bliss and Paige being the “heads and tails” of the two WWE main roster brands might be very interesting.

We’ll see what happens but if I were a betting man WWE needs to figure out something for a non-wrestling Alexa Bliss to do.