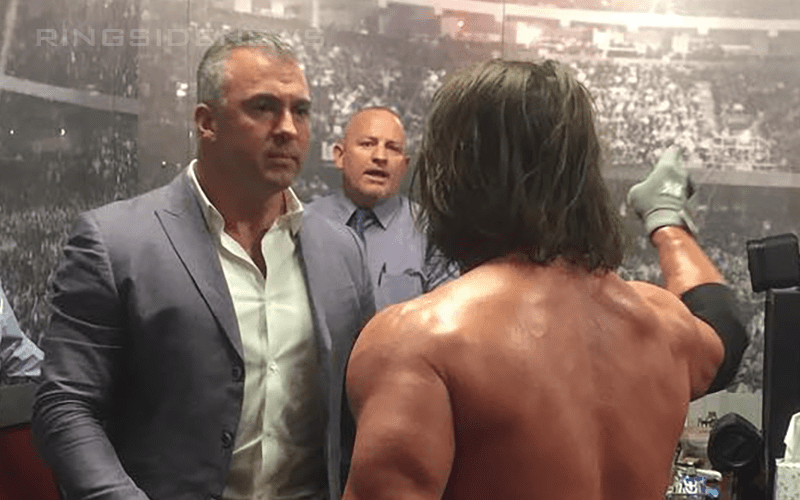 AJ Styles has been a part of WWE in a big way ever since his debut at the 2016 Royal Rumble. But reports are that his WWE contract could be running up and he wants a lighter schedule. Since dropping the WWE Championship, he wasn’t at Survivor Series and it looks like he might be in some serious negotiations right now.

Mike Johnson stated on PW Insider Elite audio that Styles is currently a subject of conversation when it comes to his current WWE contract. He’s not scheduled to be at SmackDown this week either, and although things could change, things certainly seem to be up in the air at this point for The Phenomenal One and WWE.

“There’s a lot of talk behind the scenes about the future of AJ Styles, the former WWE Champion coming out of the Survivor Series. Styles was not at the Survivor Series pay-per-view last night. We have not heard that he is scheduled for TV this week. He is scheduled to do an autograph signing I think on November 23rd at the Autorama Convention in Houston, Texas.”

“So there was a story making the rounds backstage that Styles is in the midst of a contractual issue with WWE. I don’t believe that to be 100% the case. The version of the story being passed around is that his deal is up at the end of the year. However, we’ve confirmed with several people that he’s actually signed through April of 2019.”

“So he’s got 5-6 months left on his deal. He is negotiating a new contract we are told. It’ll be interesting to see what sort of deal he gets from the company. As one person said to me he can make more money working for WWE than he can anywhere else in the world right now and he’s in the top 1% of that company so it’s not something you’re going to walk away from without really thinking about it.”

Johnson noted that he doesn’t foresee AJ Styles leaving at this time because of all the money he would be leaving on the table if he left. But as we previously reported concerning his contract status, he’s reportedly asking for a lighter “Randy Orton” schedule and he very well might get it.

Only time will tell how things pan out because you never know what can happen in pro wrestling. But right now it seems like AJ Styles is going to be with WWE at least through WrestleMania according to Johnson’s sources.