X-Pac opens today’s show by saying he had a great weekend. He made an appearance and ran into a lot of friends he hadn’t seen in a while. He saw Ken Shamrock, and he was thrilled to learn that Shamrock plans on returning to the wrestling ring for some upcoming matches. He notes that the indie scene is hot right now and he’s happy that Shamrock can return for a few matches to take advantage of that.

X-Pac gives credit to Triple H, who had to work the majority of last Friday’s Crown Jewel match against the Brothers of Destruction with a torn pectoral muscle. He calls Triple H a “tough son of a bitch” for finishing the match in that much pain. He notes that he was texting with Triple H on Monday night and Triple H confirmed that his bicep wasn’t torn; it was just his pectoral muscle that tore. 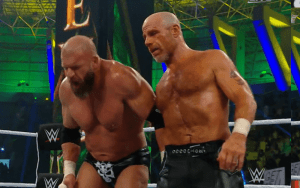 He points out that it can be dangerous to fly with those types of injuries so he’s not sure how WWE managed to get Triple H home safely, but luckily everything worked out. He also credits Shawn Michaels for delivering in his return to the ring. X-Pac texted Michaels after and told him that he was a pleasure to watch in the match, noting that for someone who hadn’t wrestled in nearly a decade he looked great.