Ross opens today’s show by congratulating Abyss on his induction into the Impact Wrestling Hall of Fame. Ross notes that he’s always been a big fan of Abyss, and he thought Abyss would have been a great opponent for The Undertaker. Abyss is so athletic and good that he would have been able to have a great feud with Undertaker, but unfortunately it never happened.

Ross thought the highlight of RAW this week was the interaction between Ronda Rousey and Nikki Bella. He’s not a fan of the memorized dialogue, but he thought Rousey and Bella did a great job with their lines. He thought this interaction did a lot to help the build towards their match at Evolution. 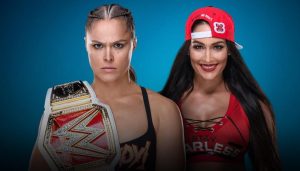 Ross says he’s really looking forward to the tag team match between Lita/Trish & Mickie/Alexa. He notes that Alexa is red hot right now and Mickie James is a reliable veteran who seemingly continues to redefine herself. He says he’d open the show with this match, and he’d close the show with the Smackdown Women’s Title match between Charlotte & Becky Lynch.

Ross is happy to see that WWE appears to be backing Drew McIntyre heavily at the moment. Ross thinks McIntyre is a great talent, and suspects McIntyre will win either the Universal or WWE Title at WrestleMania this year. Ross also likes the turmoil in The Shield right now but he wonders whether Ambrose will actually turn heel, adding that perhaps Seth Rollins will be the one who turns.