Charlotte talks about being a part of this year’s ESPN Body Issue. She says she loves what that magazine stands for in the sense that it showcases a lot of different, unique-looking bodies. It meant a lot to her to know that they thought highly enough of professional wrestling to include the wrestling business in that annual magazine.

Circling back to the fierce travel demands facing her and all the other WWE employees, Charlotte notes that her routine is very important. She also points out that she gets her sleep which is very important, whether it’s on a plane or going to bed early after a show instead of eating. 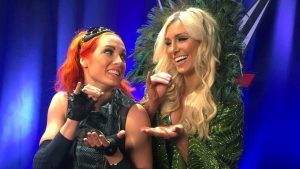 From time to time her routine gets thrown off and that can lead to her being depressed. She notes that her routine keeps her focused and happy, and when that changes it affects her entire mindset. She informs that she doesn’t really like down time because she still struggles with the loss of her brother, even though he passed five years ago, and she really focuses on those negative feelings when she has free time.

Charlotte informs that she doesn’t find it harder to portray a babyface compared to a heel, but she does think it’s harder for people to accept her as a babyface because she’s had so much success. She’s so happy for Lynch and says that Lynch deserves all the attention she’s getting right now.