Charlotte informs that she always wanted to travel the world, and now through working for WWE she’s about to make her fifth trip to Australia. She says she’s really looking forward to this trip because the stars of RAW and Smackdown will be there together, and this event is also going to be huge, much like WrestleMania.

Charlotte says that anytime you’re involved in an intriguing storyline it’s fun. Fans are really invested in this program between her and Becky Lynch, so now it’s their job to take advantage of that in order to make it last as long as possible. She points out that she’s worked with Lynch before but the dynamic is different this time due to the way the fans are reacting to Lynch. 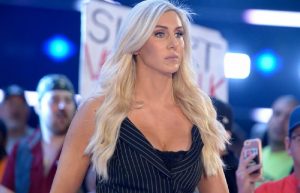 Charlotte mentions that she doesn’t mind getting booed by the fans at all. If she wasn’t getting a reaction she’d be concerned, but as long as the fans are reacting to her in one way or another she’s doing her job. She notes that it just shows that the fans are invested in the feud.

Garcia informs that she spoke to Stone Cold Steve Austin recently, and she told him that this Lynch/Charlotte feud reminds her of his feud with The Rock many years ago. Charlotte doesn’t want to compare herself to The Rock, but she can see why some fans are making those comparisons because they’re two dominant forces in the women’s division today.