Ross opens today’s show by speaking about the way WWE is booking their major stadium shows in Australia and Saudi Arabia. He points out that some people have been critical of WWE for putting so much attention on veteran talents for these shows, but Ross doesn’t agree with that criticism at all. He notes that matches like Triple H vs. Undertaker brings more attention to these shows, and gives young talents a great opportunity to maximize their minutes in front of a larger audience. 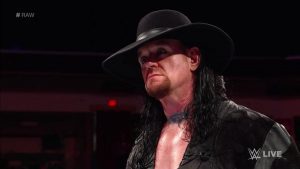 He adds that he’s just as excited about the Triple H/Undertaker match than he is about any other match on that card. It’ll also be cool to see Kane and Shawn Michaels involved in that bout. In a similar line of thought, Ross says he’d actually be dissapointed if Hulk Hogan doesn’t return at the Crown Jewel event, given the rumours that have been circulating recently.

Ross takes a moment to praise NXT Champion, Tommaso Ciampa. He says Ciampa’s a “hell of a heel” who sells beautifully, which is a key skill for heels. He adds that Ciampa’s a big time player who’ll be a big part of WWE’s plans for the years to come.