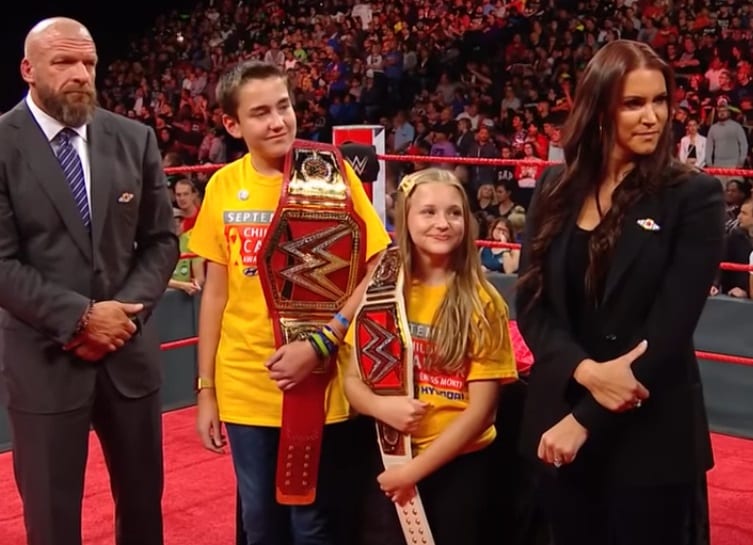 Monday Night Raw featured a pretty long segment this week where both Triple H and Stephanie McMahon appeared in the ring and didn’t address a television storyline. Instead, they focused on WWE’s charitable efforts. Afterward, the Raw locker room, both heel, and babyface came out to the entrance in order to welcome 2 very brave and deserving kids.

Although the Denver crowd seemed to support this segment with “You deserve it” chants, the television audience didn’t seem to agree. In fact, a ton of people turned the channel if they were watching in the first place. Raw brought in a record-low rating for the company and the lowest of the modern era.

Dave Meltzer noted in The Wrestling Observer Newsletter that due to the placement of the Connor’s Cure segment at the beginning of the second hour, but the segment was there to lose ratings for the benefit of WWE and Hyundai.

“It’s hard to pinpoint the culprit, but the second hour had a long Connor’s Cure self-congratulatory segment that was clearly there to sacrifice ratings for P.R. purposes for both WWE and Hyundai.”

It’s nice that WWE does this sort of thing and their charitable efforts, although they might have different motivations, do go on to cause a lot of good things. But perhaps WWE needs to consider their audience and ratings, but then again their next 5 years is already locked down to earn huge money so they can essentially keep doing whatever they want.