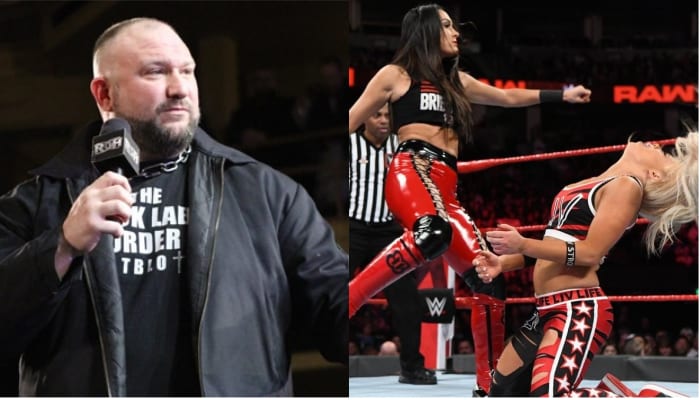 Brie Bella took a couple shots at Liv Morgan during Raw and 2 of those kicks landed squarely on Morgan’s face knocking her out. Actually, the first shot knocked her out but the 2nd one confirmed a concussion. Bella wasn’t even looking at Morgan when she was firing off those dangerous kicks either because she was trying to look over to the heel corner of the ring at Ruby Riott and Sarah Logan.

But although some fans are upset by this, there are still people who are coming to her defense. After all, most fans have never locked up in a pro wrestling ring so they don’t realize any of the dangers involved.

Bubba Ray Dudley aka Bully Ray is a WWE Hall Of Famer and he’s been a part of plenty of spots in the ring that didn’t go as planned. He spoke about Liv Morgan’s concussion on Busted Open Radio and didn’t place all the blame on Brie Bella. In fact, he said the blame might go both ways. He also broached this topic by relating a story from his own career when he accidentally split open The Undertaker.

“You can’t hit somebody in the back with a chair but let the chair ride too high and hit him in the back of the head. My chair shot was supposed to hit him square in the back. My chair shot went high and the lip of the chair caught The Undertaker in the back of the head — split him clean open in the beginning of the match — 9 staples. I should have been crucified. You know what happened after the match? I went into the locker room just me and him he didn’t yell. His voice never went above the tone I’m using right now. He politely asked me to sit down and he then educated me on why that can never happen again.”

“He didn’t threaten me. He told me how it could affect my career when it came to carelessness moving on. It was handled in the most professional of ways. Because he knows just like I know just like everybody else knows that it ain’t freaking ballet. Accidents do happen. Mine was a completely careless accident. I know how I made my mistake but I should have never made my mistake.”

“There is so much negativity with fans on social media, ‘oh she botched this — oh she did this wrong.’ People taking her side or burying her and everything like this. You’re not the professionals people. If you think you know how to do it or you think you can do it better please become a wrestler!”

Hopefully, Liv Morgan will be back and it would be great if she got some kind of retribution on Brie Bella because of what happened. At least it might help the fans get some of that animosity out of their system. At this point though, we’re just waiting to see how Liv’s concussion is because as we all sadly know in today’s WWE that could be a career ending injury.