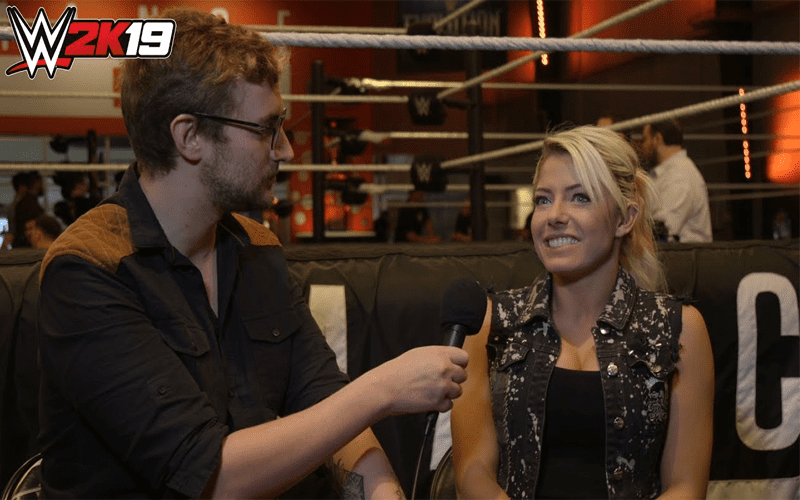 Former RAW Women’s Champion Alexa Bliss was interviewed by Adam Pacitti of Cultaholic. During the interview, Bliss revealed her reaction to herself in WWE 2K19, told a childhood story and explained why her Evolution match is so special to her.

First providing her opinion on the WWE 2K19 character based on herself, Bliss was shocked at the realism and even finds it rather eerie.

“I love it. I think it’s so realistic. It’s crazy how each year the- our characters get more and more realistic, to the point where it was kind of eerie, how precise it is. But I think it’s awesome. The entrance was cool. We got to see our entrances for the first time, and the signs in the background are cool. There’s this one sign that got me. It was a sign of me doing my finish off the top and I thought ‘that’s so cool.’ Just those little details are amazing.”

Sharing a childhood story, Bliss explained how she told her teacher in kindergarten that she wanted to be a Barbie doll.

“Oh, for sure! Like, I love that. I always tell the story [of when] I became an action figure. When I was in kindergarten, I would always tell my kindergarten teacher- she would ask what we want to be when we grow up. Everyone was like ‘I wanna be a fireman,’ and I said ‘I wanna be a Barbie.’ She told me ‘Well you can be like Barbie, what Barbie is,’ because she has so many careers and I was like ‘No, no! I want to be a Barbie.’ So when Mattel came out with the Barbie dolls, I tweeted. I was like ‘Hey kindergarten teacher, look what’s up?’ So it’s like stuff like that- it’s like really cool to see yourself on a video game or as an action figure; on a poster, even.”

Bliss reveals why the match she has against Trish Stratus at Evolution means so much to her.

“I’m very excited. I watched Trish growing up. Her and Rey Mysterio were my favorites. To be able to have that opportunity- I’m super grateful for that because when we had the all-women’s Royal Rumble, I, unfortunately, was the Champion and couldn’t be in the match. It was so cool to see all the legends and NXT girls come together for a big, big match. I was so bummed out that I couldn’t be in that moment because I wanted to be in the ring with Trish, Lita, Jacqueline- you know? I thought it was so cool, but now to have that opportunity to be with Trish, it’s- I’m very excited.”

When asked to comment on what she feels is the next step for women in WWE, Bliss had the typical reaction most women’s wrestlers now have.

“I would say main event WrestleMania. I would say that is gonna be the top of the pyramid, and I don’t think it’s that far off for our women.”

On that note, she is also asked by Pacitti if that is something she wants to be a part of.

“Absolutely. Absolutely. I’ve always said, if women main evented WrestleMania it should be a big battle royal with girls from NXT, women from the past- and you know, they did that with the Royal Rumble match. So, if we could take that exact same match but include me and Charlotte this time, and put it in the main event of WrestleMania, that would be awesome.”

Finally, Pacitti goes through some wordplay with Bliss, asking the former Champion to respond with the first word that comes to mind.