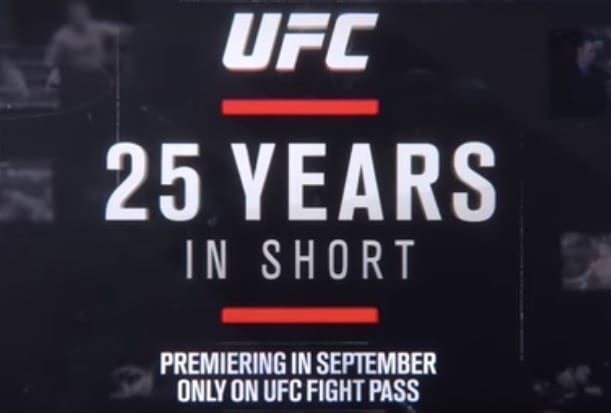 The Ultimate Fighting Championship has announced that a 25-part short film series will be released in the next few months in order to celebrate the company’s 25th anniversary.

The episodes will all tell different parts of the UFC’s story from the beginning right up to the present day, as confirmed during the below press release. In Aaron Bronsteter’s tweet, you can also see a list of the episodes that will air.

Las Vegas – UFC®, the world’s premier mixed martial arts organization, today announced details of a 25-part documentary series that will debut in September to celebrate the company’s silver anniversary. Entitled UFC 25 Years in Short, the compilation of short films will present 25 captivating UFC stories, one for each year of the promotion’s existence, which will examine UFC’s amazing evolution, fascinating characters, and lasting influence.

UFC 25 Years in Short will launch on Monday, September 17 on UFC FIGHT PASS®, the promotion’s digital subscription streaming service. Films will premier one at a time, every Monday, Wednesday and Friday at 3 p.m. ET / 12 p.m. PT. The series will be rolled out in just over an eight-week span, culminating with the final film on Monday, November 12, UFC’s official 25th anniversary.

The episodes will have an ESPN-like feel to them, which is hardly surprising given that the UFC signed a deal with the company not too long ago. Alas, it’ll be interesting to see how these episodes play out and how they’re received because, for the most part, the UFC is praised for their work when it comes to projects like these.

The next chapter in their story will come this weekend when they head to Lincoln, Nebraska for UFC Fight Night 135.