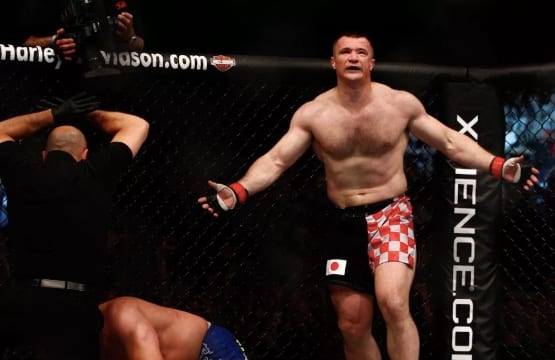 Rizin have confirmed that Mirko Cro Cop will be returning to the cage, as he approaches his 44th birthday.

The legendary MMA fighter will compete at Rizin 13 on September 30th in Saitama, Japan against Roque Martinez. Cro Cop was last scheduled to compete at Bellator 200 in the main event of the night against Roy Nelson, but unfortunately, he had to pull out due to injury just days before the contest was set to take place.

His last fight came back in December 2017, and despite having 11 losses to his name throughout his storied career, Cro Cop is actually riding an eight-fight win streak. Five of those victories came in Rizin, one in the UFC and two with Inoki.

Cro Cop has taken on some of the sport’s most iconic figures throughout the course of his career, which began back in 2001 with his first professional fight. He’s long since been considered one of the greatest heavyweights of all time, and as it stands, it seems as if he has no real plans to retire.

It remains to be seen whether or not he’ll end up competing in Bellator as he was initially scheduled, especially given how much success he’s had with Rizin since starting off his tenure there.

Rizin continues to be viewed as an interesting yet somewhat controversial alternative to the UFC and other major promotions, with many questioning whether they’re actually good for the sport. Either way, the fans are in for a treat when Cro Cop steps inside the cage again for what could prove to be the final time.