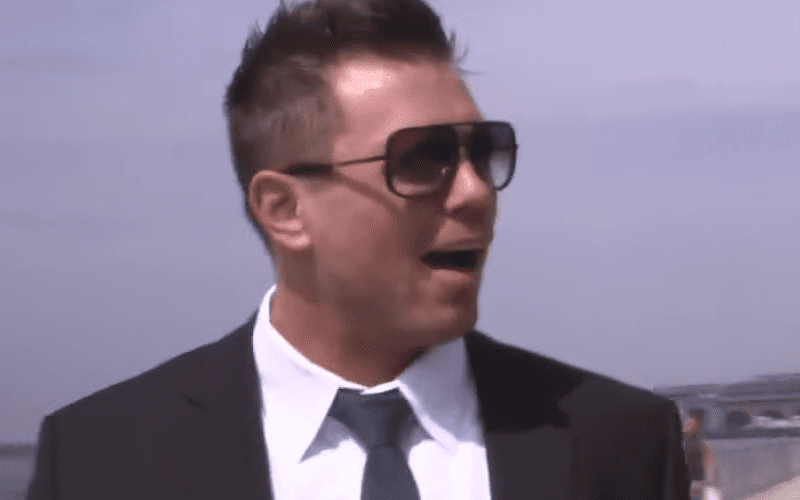 The Miz was the latest guest on WWE Now with Cathy Kelley, where he discussed at length what really happened on Talking Smack when he and Daniel Bryan exchanged words.

The most iconic moment in Talking Smack history happened between The Miz and Bryan after The Miz had been told by WWE management that they didn’t have time for the Intercontinental Champion on their show.

Using Talking Smack as a platform to express himself, The Miz went off on Bryan as his General Manager for not allowing him to take part in the show in some capacity. The SmackDown Live Superstar explained in depth what his perspective on the whole experience was.

“He started the whole thing. Do we not remember this? I go on to Talking Smack- by the way, I wasn’t on the show. I wasn’t on SmackDown Live. I was told as the Intercontinental Championship ‘we don’t have time for you today.’ So I was a little upset. Daniel Bryan was the General Manager and he is a person that can get things done, right? So I go on there and my General Manager – my boss – tells me that he doesn’t like my style of wrestling, thinks I’m a coward and that I’m soft. Your boss comes up to you. You’re working as hard as you can. You get told you’re not working today because we don’t have time for you. You go ‘why?’ ‘Well, I don’t like the way you interview. I think you have a terrible voice and a terrible look and you’re not good.’ You’d be pissed, right? So I kinda just let him have it.

“He started the whole thing. He called me a coward. I’ve been called a coward a million times, that’s fine- but saying that I have a soft style of wrestling while you’re sitting there, and you can’t go in the ring and perform while I’m in there day in and day out, working to make a title prestigious and relevant like I remember it when I was a child, and you’re going to sit there and tell me that. It’s just not gonna happen. Then, once I got in his face, everyone is always like ‘Oh yeah, you were just berrating him and berrating him.’ I was like, wait a second, I thought this guy was going to hit me in the face. He always talks about punching me in the face. What did he do? He turned around and walked away. Turned around and walked away. Is that fighting for your dreams? Who’s the coward? A coward walks away, am I right? So I don’t know.

“Everyone says this is eight years in the making. Yeah, I’ve had eight years to carry Daniel Bryan on my back and I’m just relieved that SummerSlam will finally be the nail in the coffin for Daniel Bryan’s career. Because the fact is, this is Daniel Bryan’s ‘prove it’ match. If he doesn’t beat me, then I honestly can fully tell everyone that his return has been a bust, because up until right now, it has been a bust. He has to beat me, let’s just put it that way. He wants to prove to the WWE Universe, he wants to prove to everyone that Daniel Bryan’s return isn’t a bust. Well, it’s gonna suck when he loses.”

Do you agree or disagree with Miz’s comments? Who do you believe leaves SummerSlam victorious? Sound off in the comments below.