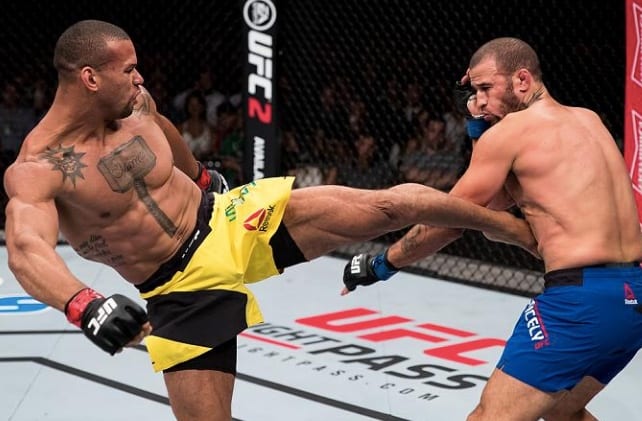 According to Ariel Helwani, Thiago Santos is now the frontrunner to step in and fight Jimi Manuwa on short notice at UFC Sao Paulo.

Santos, 34, fought less than two weeks ago at UFC 227 in a winning effort against Kevin Holland, is being tipped to take on Manuwa in the wake of Glover Teixeira dropping out of the bout due to injury. The UFC has been searching for a replacement to fight Manuwa for a few days now, with Anthony Smith being another man who threw his name into the hat.

Thiago is a natural middleweight but seems to be more than willing to step up a weight class for this fight, to take on the Brit who was, at one point, just one win away from a UFC Light Heavyweight Championship opportunity. At this point, though, he’s on a two-fight losing streak after defeats against Volkan Oezdemir and Jan Blachowicz – with the latter coming in his hometown of London, England.

Thiago Santos has now emerged as the frontrunner to fight Jimi Manuwa on short notice in the main event of next month's UFC Fight Night São Paulo event on Sept. 22, though the fight isn't a done deal just yet, sources say. It would take place at light heavyweight.

Gonna show this boy the meaning of respect ,through violence.

Manuwa appears to be ready for the challenge of Santos, as the UFC’s card in Sao Paulo continues to come together. A series of other big names are scheduled for this card, which will go down on September 22nd at Ginásio do Ibirapuera.

Antônio Rogério Nogueira is scheduled to return against Sam Alvey, Alex Oliveira will face off against Neil Magny, Thales Leites will square off against Hector Lombard and so much more.

If you’re a fight fan you won’t want to miss this card, especially if it’s Manuwa vs Santos that winds up being the headliner.