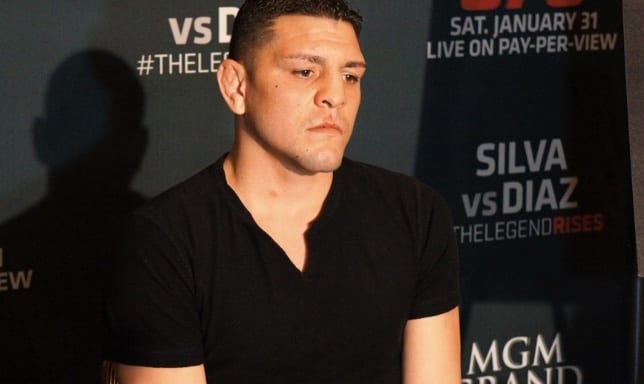 As the matchmaking fiasco surrounding his brother continues, Nick Diaz has chimed in on social media by proclaiming that he’ll fight anyone that is put in front of him.

Diaz, 35, hasn’t fought since his no contest against Anderson Silva back at UFC 183. In that time he’s been sporadic when it comes to appearing in the limelight, with some of his appearances being slightly more tasteful than others. He’s often fluctuated back and forth between wanting to fight again and not, with the majority of his focus going on his brother Nate’s career as of late.

As seen below, Nick has been speaking out on Twitter once again – to the frustration of some fans, and to the jubilation of others.

I’ll fight all you pussies make some money bitch

Nobody ever really knows what to make of Nick’s outbursts, which is probably why the Ultimate Fighting Championship has stayed away from him for the most part in the last few years. Back in May, Diaz was charged with two counts of domestic battery in a story that spread throughout the MMA sphere.

As we look ahead to the future it’ll be interesting to see whether or not Diaz gets back inside the Octagon before he officially retires, but in terms of the present, all eyes are on Nate as he continues to toy with the media and fans regarding his proposed UFC 230 fight against Dustin Poirier.

Some people believe that he will go ahead with the fight whereas others don’t, but when it comes down to it, the Madison Square Garden spectacular could really use his star power.