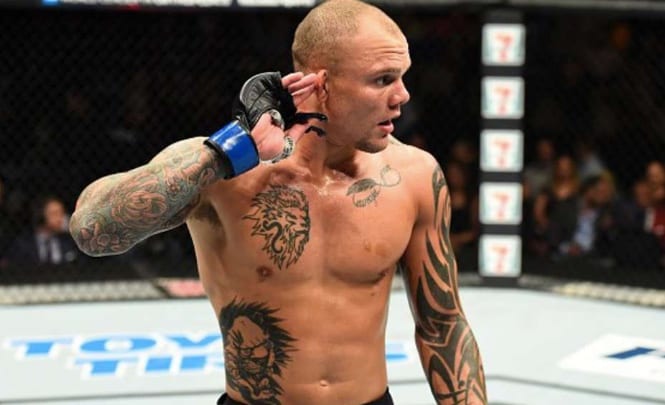 Smith, 30, took exception to Oezdemir thinking that he wasn’t taking their upcoming fight seriously courtesy of the fact that Anthony threw his name into the hat as a possible replacement for Glover Teixeira to face Jimi Manuwa in Sao Paulo.

Lionheart is coming off the back of two vicious knockout wins in as many months over Rashad Evans and Shogun Rua, earning him the unofficial title of ‘legend killer’ amongst many MMA fans. Now, however, he’s got his sights firmly set on the UFC Light Heavyweight Championship – and running through Oezdemir is the next step towards that goal.

What part of that insinuated that I wasn’t fighting you? I’ll fight you both. Questioning my ability to make it to both fights is pretty damn funny coming from you. With all respect, you’ve committed to and fell through on 3 crowds in 3 separate countries since you’re last bout.. https://t.co/EWpsskYPgH

Smith, who is usually quite calm and cordial, seemed to be a bit annoyed by No Time’s insinuation on Twitter. The two men are well known for their overwhelming knockout power, which makes this one of the most highly anticipated light heavyweight contests in recent times.

The current champion, Daniel Cormier, isn’t expected to return to the weight class prior to his impending retirement early next year. If he doesn’t wind up defending his title again then the UFC will be searching for a new king at the top of the mountain, and there’s a good chance that the winner of this bout will end up fighting Alexander Gustafsson in what could prove to be either an undisputed or interim championship showdown.

Whilst the aforementioned Manuwa may still be without an opponent, the Oezdemir vs Smith main event in Moncton is scheduled to go down on October 27th.