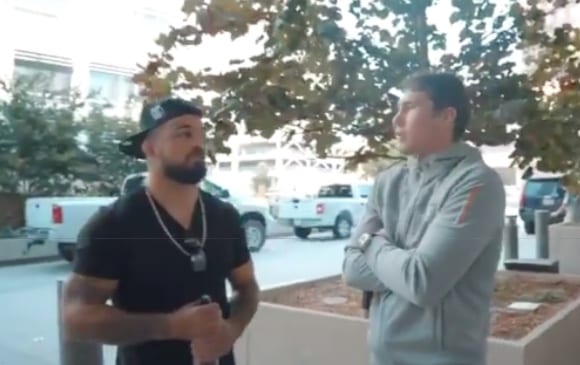 During a recent interaction with Mike Perry, UFC welterweight contender Darren Till found himself in an amusing situation after confusing a ‘spa’ with a spar.

Till and Perry had just wrapped up the UFC’s Los Angeles press conference when Perry, who Till called out and confronted at UFC Gdansk last year, suggested a sparring session. Till agreed and initially thought that he meant the relaxing type of spa, whereas Perry didn’t seem to understand all too much either.

These two men seemed to be on a collision course with one another less than twelve months ago, in the wake of their aforementioned confrontation. Now, however, Till is set to challenge Tyron Woodley for the UFC Welterweight Championship at UFC 228 – meanwhile, Platinum Perry is scheduled to take on Donald ‘Cowboy’ Cerrone, the same man who The Gorilla defeated that night in Poland.

‘Let’s go fight’ The moment Darren found out he weren’t getting a massage with Mike Perry. pic.twitter.com/5iOzoHGqwB

We ain’t bout them games https://t.co/NeMYfj96Hp

Perry, 26, is attempting to climb back up the ladder in the welterweight rankings after going 1-2 in his last two fights. Mike recently defeated Paul Felder in an absolute war at UFC 226, and on the other side of the spectrum, Till edged out a close decision victory over Stephen ‘Wonderboy’ Thompson at UFC Liverpool.

Despite their careers going off on different trajectories as of late, it still seems as if Darren Till vs Mike Perry is a fight that could become a realistic possibility in the not so distant future, especially if Till fails to beat Woodley and Perry dominates Cowboy.