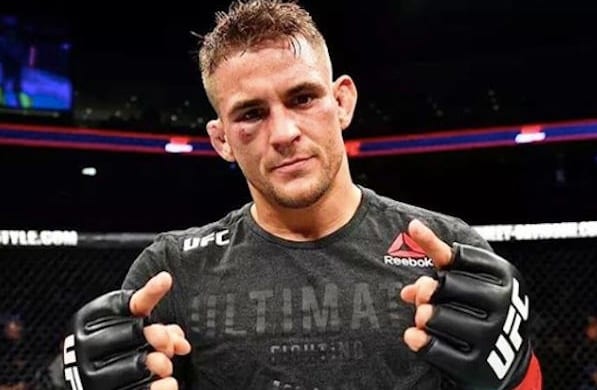 During an interview on The MMA Hour, Dustin Poirier revealed that he believes Khabib Nurmagomedov will successfully retain his UFC Lightweight Championship against Conor McGregor at UFC 229 in Las Vegas.

Poirier, 29, is coming off the back of a dominant victory over Eddie Alvarez at UFC Fight Night: Calgary just a few weeks ago, and has already been confirmed for his next fight which will take place against Nate Diaz at UFC 230 in New York City.

I’m kind of leaning towards Khabib. I don’t know if he’s gonna stop Conor or what not, but I’m thinking he’s gonna get the victory.

Poirier is currently riding a five-fight unbeaten streak, with his last three victories coming via TKO. The Diamond is in the form of his career right now, and a win over Diaz at UFC’s third annual Madison Square Garden event would almost certainly make him the next man in line for a shot at the UFC Lightweight Championship.

Dustin is no stranger to The Notorious One Conor McGregor, after being stopped by the Irishman in a featherweight bout back in September 2014. Since that night Poirier has lost just once in his last ten fights, highlighting just how far he’s come in the last few years.

Khabib vs Conor is expected to be one of the biggest fights in MMA history, both in terms of financial gain for the company as well as its global appeal. Poirier admitted in the aforementioned interview that he probably could’ve sat out and waited to face the winner, but claimed that he’s never been that kind of fighter.