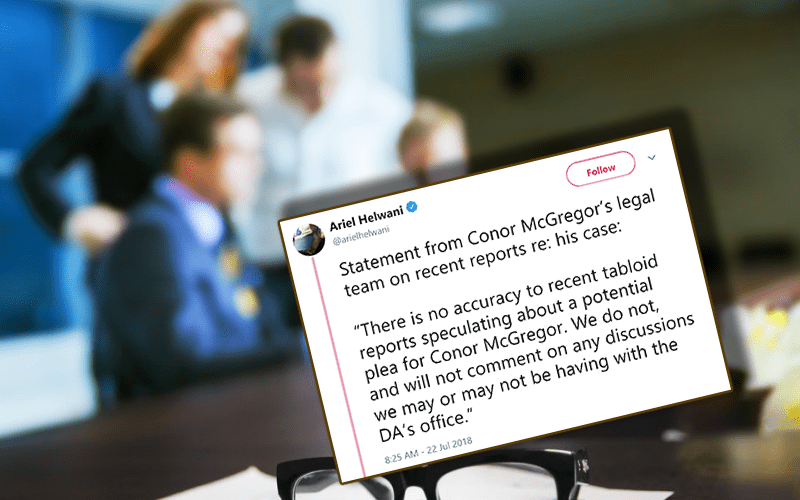 According to ESPN journalist Ariel Helwani, Conor McGregor’s legal team put out a statement shooting down the rumours that surfaced yesterday that he had already agreed to a plea deal that would see him escape jail time for the UFC 223 fiasco.

McGregor had been charged with one count of felony criminal mischief and three counts of misdemeanour assault after he threw a dolly into a bus window at the event. Reports emerging from TMZ sport yesterday suggested that McGregor’s legal entourage had negotiated a plea deal to take the felony charge off the table, which would ensure that the Irishman didn’t have to do jail time and needn’t be prevented from working in the state in future.

However, according to the statement in Helwani’s tweet, McGregor’s legal team denied that there was any truth to the rumours and affirmed their stance that their discussions with the DA’s office will remain strictly confidential.

Statement from Conor McGregor’s legal team on recent reports re: his case:

“There is no accuracy to recent tabloid reports speculating about a potential plea for Conor McGregor. We do not, and will not comment on any discussions we may or may not be having with the DA’s office.”

McGregor’s next court hearing is scheduled on July 26 in Brooklyn.