Lawler and Moore open today’s show by speaking about the attitude era. Moore doesn’t think we’ll ever see anything like the attitude era programming again, and Lawler agrees with that sentiment. He points out that he still receives a regular paycheque from WWE so he doesn’t want to ruffle any feathers by comparing today’s product to the attitude era.

Lawler sometimes wonders if WWE is partly embarrassed by the attitude era given their corporate structure today, and the fact that they’re a publicly traded company now. He wonders if there are some officials in the company that actually wish the attitude era didn’t happen. While some of the content might have been questionable, there’s no doubt that stars such as Steve Austin and The Rock brought the wrestling business to heights never seen before. 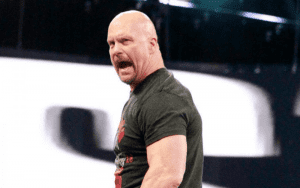 He goes on to say that the success of the attitude era has had a trickle down effect on the business, and WWE is bigger and more popular today than it was 20 years ago. He doesn’t think anyone in the wrestling world would have thought WWE would ever sign a television deal worth billions of dollars. Even Vince McMahon himself would probably tell you that those figures were beyond his wildest dreams.