Bram has a lot of guts but sometimes he might not dress for the situation all the time. While on a recent tour overseas, Bram and former Knockout Rebel recently went to Pakistan to wrestle a little bit and while they were there the two were welcomed by the locals.

Pakistan is one of those places where women have to dress a certain way due to the strict religious code so Rebel followed suite. But Bram didn’t seem to care as much.

When posing with the Major General, Rebel appeared respectful and Bram’s shirt… you can see for yourself. We’re not sure if the Major General took a look at Bram’s merch, but the double middle fingers and pentagram are probably a universal symbol at this point. Regardless of context, that is all most people overseas will notice about the shirt.

It’s also noteworthy that Bram’s Grado fanny pack isn’t the most offensive thing in this picture too which is a rarity when you’re talking about fanny packs. 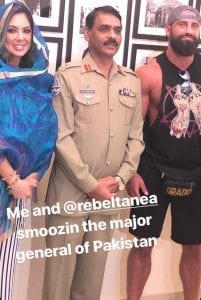