Christian thought Ricochet & Velveteen Dream had a terrific bout. He points out that Dream has really grown into his character and Ricochet is second to none in terms of what he can do in the ring, and he thought both men meshed really well together. Edge agrees entirely and points out that Dream has only been working for about three years, and when he improves on some of the details of his in-ring work he’s going to be fantastic.

Edge also thought the tag team match between Burch/Lorcan & The Undisputed Era was a great way to start the show. He notes that Undisputed Era are walking the line between heel and babyface and sometimes that makes it tough to work matches, but in this case it didn’t affect it at all. He adds that even while losing Burch and Lorcan were more over when the match ended than they were when the match started, and that’s a positive thing. 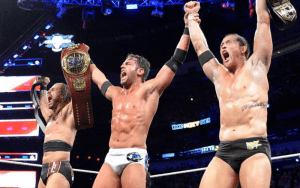 Edge was a huge fan of the NXT Title match between Lars Sullivan and Aleister Black. He thought Black brought Sullivan up to his level during this match, and he thinks Black is ready to take the next step in his career. He says that if he could return to work a match against anyone right now it would definitely be Black. Christian notes that the botched Black Mass towards the end of the match added realism to the fight and he didn’t hate that at all.

Christian is also very complimentary of the main event match between Johnny Gargano and Tommaso Ciampa. He says that Ciampa is standing out in NXT right now because he’s a true old school heel, and this was an old school-paced match.