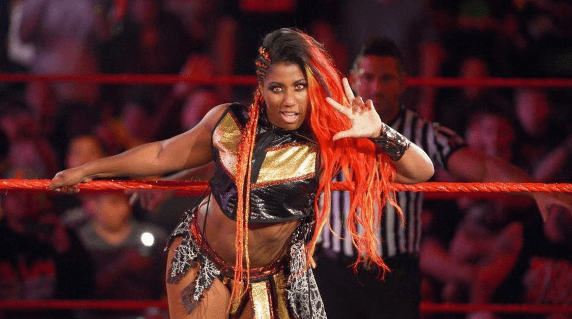 The War Goddess did an interview with the Miami Herald ahead of her Money in the Bank ladder match later this evening. In it, Ember tells a heartfelt story about the moment she discovered she was being called up to the main roster. That is, that she wasn’t slightly prepared for it at all.

That weekend was such a blur, because it was coming off Mania Week. I remember being pulled into a room with [WWE Executive Vice President of Talent, Live Events and Creative] Triple H, [NXT Assistant Head Trainer] Sara Amato and [WWE Head Trainer] Matt Bloom, and I thought I was in trouble for some reason. ‘Oh no. I don’t ever do anything wrong,’ but I’m like, ‘Oh God. I did something wrong. What is it?’ Like it’s a kid stealing a cookie and getting caught. They were like, ‘We just want to thank you for the awesome match at TakeOver [New Orleans]. Thank you so much for everything you’ve done for NXT. You’re going to Monday Night Raw.

I was like, ‘What? Hold on. Hold on,’ and I remember I broke down, and I started crying, and a camera came out of nowhere, and it was in my face, and I was like, [Sounding Emotional] ‘Why do you guys have to ruin everything with cameras.’ [Chuckles]. That’s the first words I said, after finding out I’m on Monday Night Raw.

The former NXT Women’s champion is one of the current rising stars of the women’s revolution, and she could make quite an impact if she manages to snag that magical briefcase tonight in Chicago.