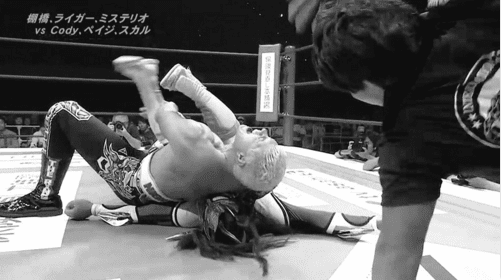 The American Nightmare continues to build his legacy outside of the WWE. His departure from the company has given him the spotlight he never really had, and he’s surely a much bigger star because of it.

At Dominion, he teamed up with fellow Bullet Club members Marty Scurll and Hangman Page to face the debuting Rey Mysterio Jr., Hiroshi Tanahashi, and Jushin Thunder Liger in six-man action. After a back and forth affair, Rhodes would score the victory for his team after hitting Liger with the Cross-Rhodes. Cody took to Twitter to heavily rub it in the wrestling universe’s faces.

I defeated 3 of the biggest legends in our world

In less than 20 minutes

What have I become? pic.twitter.com/i3n8UDGK5h

His night didn’t end there. After Kenny Omega finally triumphed over the dominant Kazuchika Okada to become IWGP Heavyweight champion, Cody walked down to ringside as if he were planning on challenging the Cleaner. He decided to turn back, and wait for a different opportunity to strike.