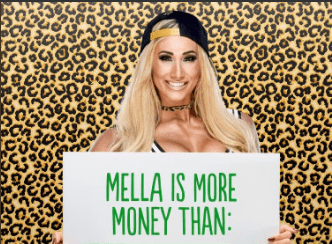 WWE SmackDown Women’s Champion Carmella has come a long way from being the last Superstar drafted in 2016’s Superstar Draft. Since then, she has captured the Money in the Bank briefcase and is now the leading lady of the blue brand.

“Mella is Money” is a catchphrase that she has been using lately. She took to her Twitter account to reveal the list of people that she is more “money” than.

The list includes every female superstar that has ever competed in the WWE, several female athletes, actresses, female singers and several other female figures.

What do you think about Carmella’s long list? Tell us in the comments below…