Edge opens today’s show by giving a shout out to Drew McIntyre for his promo on RAW this past week. Upon seeing the promo Edge thought, “God damn, that’s exactly what he needs to be doing”. He could tell McIntyre believed every word he said, and if he continues to execute like that he’s going to be in great shape.

A listener writes into the show and asks about the idea of having tag team partners split up and face each other in lengthy programs. Edge doesn’t think two Superstars who come in together as a team and then split off works well for a sustained program. When two guys pair up randomly like Johnny Gargano and Tomasso Ciampa, it can work when they split again. Christian notes that it’s harder now than it was years ago because fans know more behind-the-scenes details nowadays. 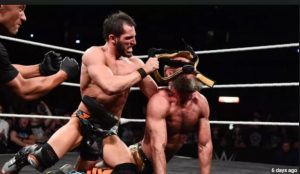 Another listener writes into the show and asks if today’s wrestling be better with more kayfabe. Christian notes that it’s hard to stay completely in character nowadays, but points out that Tomasso Ciampa has done a great job of that specifically on social media. Titus O’Neil, on the other hand, is a tremendous guy in real life who works with charities and that makes it tough to stay in character if he’s portraying a heel on television.

Edge is thankful he doesn’t have to ride that fine line on social media. He points out that all Superstars have to choose if they want to use Twitter to further their characters, or if they just want to be themselves on there.