He notes that UFC is in desperate need of stars right now, and that’s why they’ll probably be brining Brock Lesnar back for a fight in 2018. Lesnar has also signed a new contract with WWE last week and Ross believes that’s tremendous business by Lesnar, who’s clearly hoping to balance his wrestling and MMA careers at the same time. 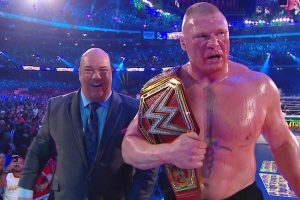 Ross sends some get well wishes to his old commentary partner, Jerry “The King” Lawler, who suffered a stroke prior to WrestleMania weekend. He also sends get well wishes to Leon “Vader” White, who underwent open heart surgery last week. He considers Vader to be one of the greatest big men of all time, and he has fond memories of signing Vader to wrestle in WWE in the late 1990s.

Ross says he really enjoyed HBO’s Andre the Giant documentary. He had high hopes for the film and he wasn’t let down, even though he would have loved to get more new information surrounding Andre’s life. He loved the interviews with Andre’s family in Paris, and he thought it was very interesting to see Vince McMahon in such an emotional state of mind. He also thought Gene Okerlund and Jerry Lawler were great in their roles in the film.