Russo is joined on today’s show by his co-host, Jeff Lane, Bin Hamin, and Stevie Richards.

Russo points out that professional wrestling has always been based around good versus evil. This year WWE has promoted WrestleMania based on “good wrestling matches” which appeals solely to marks who are going to watch the shows anyways. They’ve lost the casual fans, and they’re never going to get them back if they keep promoting matches based on two good guys tapping each other on the head. 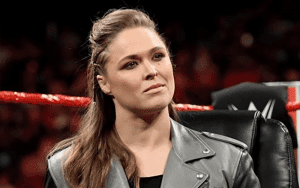 Russo thought the Ronda Rousey/Stephanie McMahon interaction on RAW was very underwhelming. He points out that WWE is pushing Rousey as the baddest woman on the planet, but then Stephanie picked her up and threw her through a table. Rousey laid on the mat selling her stomach while looking up at Triple H and Stephanie, and he just thought the whole thing was lacklustre.

Lane points out that Rousey needs to realize there’s more to life than WWE, and her brand is suffering right now due to the way WWE is presenting her on television. Russo understands that point, but he also notes that WWE might be paying Rousey millions of dollars. If that’s the case, she’s probably going to do what they ask of her so she can continue to cash their cheques.