Vito opens this show by pointing out that Fastlane was a filler PPV in his opinion. He thought the show was very predictable, noting that even Orton/Roode was predictable because Roode’s babyface run was very bland and it was time for a Title change.

He goes on to say that Nakamura/Rusev shouldn’t have opened the show. He thought this match fell flat by relying on several wrestling holds, and fans were chanting for Rusev when WWE surely wanted them to chant for Nakamura. Vito thinks this show should have opened with The Usos versus New Day. He also adds that if WWE was determined to have Nakamura/Rusev open the show, they should have put Rusev over to shock fans because as it was, this match did nothing for Rusev or Nakamura. 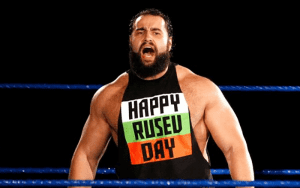 Lane thinks WWE really dropped the ball with Roode’s United States Title win. His entire run was flat and Vito agrees entirely. Vito likes that Orton won on Sunday, poiting out that this will probably lead to a Bobby Roode heel turn, putting Orton in a tough spot at WrestleMania having to tackle two heels in Roode and Jinder Mahal. He predicts that Orton will retain in that match, and Mahal will be the one to take the fall.

Lane agrees with Vito that WWE seems to be heading for a triple threat match for the United States Title, and he notes that WrestleMania seems to be filled with multi-man matches lately. He understands that WWE tries to include as many performers as possible on the WrestleMania card, but WrestleMania would be a great place to showcase a couple of great one-on-one bouts as well.