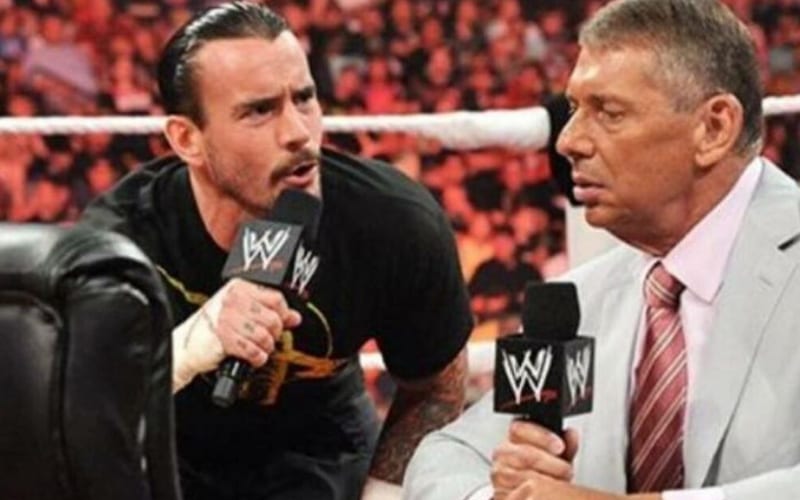 AEW opened their doors and captured a lot of attention from the pro wrestling world. Their debut episode of Dynamite garnered over 1 million viewers, causing WWE to send out a congratulatory message and remind them that it’s a marathon and not a sprint. If you ask CM Punk, Vince McMahon isn’t concerned with All Elite Wrestling.

While speaking to TMZ, CM Punk said that AEW gets a lot of buzz, but Vince McMahon isn’t afraid of them. If McMahon was intimidated by AEW then he “wouldn’t allow it to happen.”

“It’s interesting, for sure. Obviously, I understand the buzz. Maybe I’ll give it a shot and watch it, but it feels like it’s going to be softball questions. I don’t if they’re going to ask Jericho all the tough questions and nor do I think that they possibly should. It’s an interesting situation and it’ll probably be a feel good interview where they talk about Jericho’s past at WWE. I’m sure they’ll mention AEW, but they won’t get into the hard questions that I think people are interested in.”

“Honestly, my knee-jerk reaction and opinion is that I think it shows Vince McMahon isn’t afraid of AEW at all. If he was, he wouldn’t allow that to happen. Anytime anybody is talking about you, it is good. There will be people that don’t know AEW exists who will watch it and say, ‘Cool, I didn’t know that. I just thought Jericho was retired.’ There is also something to be said about keeping your guys special and the only place you can see this superstar is on my television show, but it’s a new age and both companies need all the eyeballs they can get at the moment.”

CM Punk understands how Vince McMahon works. He spent enough time in WWE and he witnessed a lot of the Chairman’s decision making process go down. The way he sees it, if Vince McMahon didn’t want AEW around then they wouldn’t be. Right now they don’t pose a threat to him so he’s carrying on with his own business as usual.