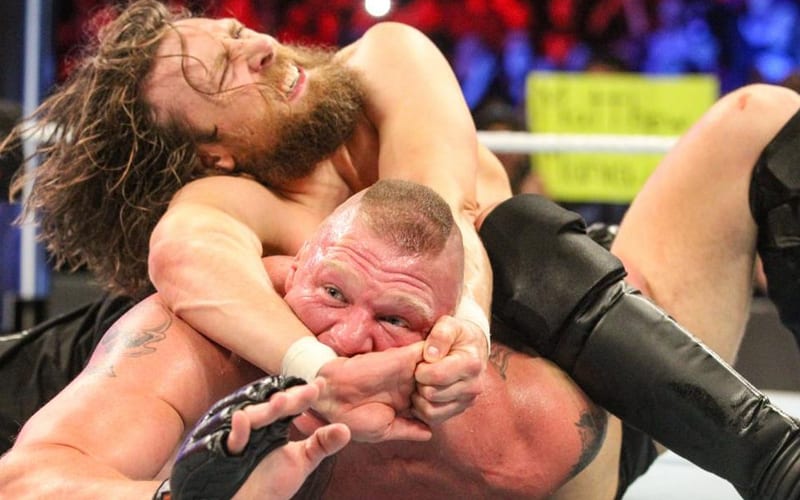 Daniel Bryan and Brock Lesnar got to have a Survivor Series showdown, but it didn’t play out the way Bryan always planned.

While speaking with TalkSport, Daniel Bryan revealed that his champion vs champion match against Lesnar didn’t go down as he always envisioned. He wanted to be a babyface when the two met, but he was in the midst of his heel Planet’s Champion persona. He had to make it work and roll with the “weird” situation which made it “more pleasurable” for him.

“I was thrilled, I was absolutely thrilled. I wanted the Brock Lesnar match for a long time. But how I always envisioned it was babyface Daniel Bryan! Yes man Daniel Bryan, underdog Daniel Bryan against the killer Brock Lesnar. But I had literally just become the Planet’s Champion and kicked AJ Styles in the nuts [laughs]. So it was a really weird thing, but I think the weirdness of it also made it fun and made it more pleasurable for me.”

“Wrestling Brock Lesnar, I don’t think anybody appreciates how great Brock Lesnar is and the mind that he brings to wrestling. I also think, and from a character perspective I’ve said this on a Talking Smack or whatever, but it’s actually not true, is I think Brock Lesnar loves this. He just also loves farming, loves being at home and he’s not going to do it just because he likes doing it, he’s going to do it because ‘hey, you need to pay me to put my body on the line’ that sort of thing, right? But his eyes light up when he does this. That’s the thing.”

“That match is something that I’m really, really proud of and it was a test for me. I don’t think there’s been anybody in the history of WWE who’s been more excited to take a German Suplex from Brock Lesnar than me. Just to be like ‘Ok, let’s see! We got to see what I got here. Am I good?!’ German Suplex… ‘Yep, I’m good’ [laughs].”

Some fans were concerned about how much damage Daniel Bryan could take at the hands of Brock Lesnar. The match played out as it did and Bryan is very proud of it. That doesn’t change the fact that he would likely leap at the opportunity to face The Beast Incarnate once again under the circumstances he wanted in the first place.