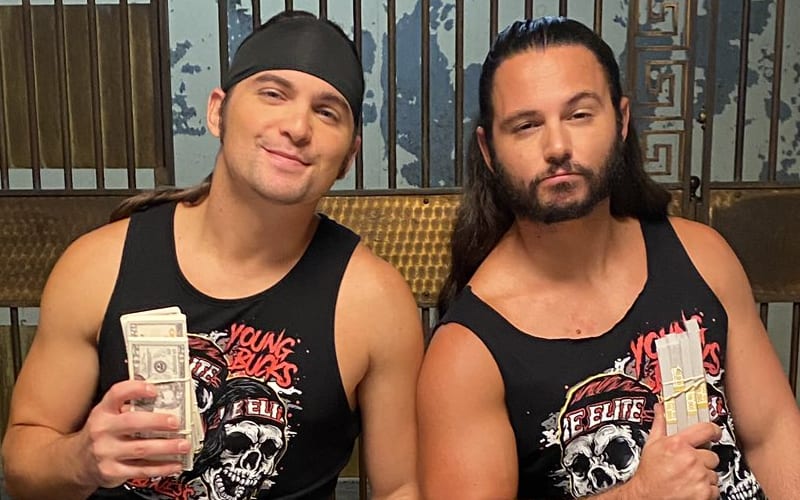 The Young Bucks were the hottest free agents in pro wrestling for a time, and they started a company instead of signing with WWE. There was a lot of money on the table and it was very hard to pass up.

Dana Massie recently spoke to the Tradecraft Podcast where she revealed that her husband, 1/2 of the Young Bucks Matt Jackson, told her that it looked like they were going to take WWE’s offer at one point.

“We were on a family vacation in Hawaii and we had just landed when Matt got a text from Hunter and he was like, ‘Do you have some time to talk?’ ‘I’m on vacation with my family.’ ‘I just need 20 minutes. Whenever you’re available, give me a call.’ I remember Matt hung up — it ended up not being 20 minutes, it was much longer than that — he looks at me and he’s like, ‘I think we’re going to WWE.’ ‘I never thought I’d hear those words come out of your mouth, but okay.'”

“Things made sense. After having the conversations he did, it didn’t sound as horrible as we expected it to be. I had always heard about how many days on the road there are and he wouldn’t be at home. Family is number one. That was a concern he brought up to Hunter and he was wonderful. Anytime we had — I was part of the conversation because I handle the business for Matt and Nick — anything we were worried about, he would reassure us and have an answer right away. We were comfortable with it.”

The Young Bucks did not sign with WWE, but it makes you have to wonder how different the pro wrestling world would be if they did. AEW might have started anyway, but the company’s internal structure would be vastly different. They would be down two Executive Vice Presidents. The Young Bucks betting on themselves yet again obviously paid off.