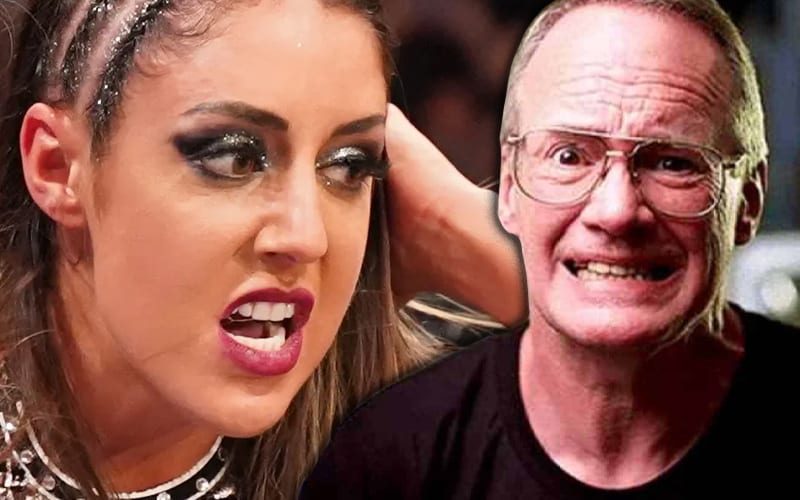 Britt Baker made headlines all week after her unsanctioned match with Thunder Rosa. She’s been through quite a journey in AEW so far. Baker was the first woman the company signed after Brandi Rhodes, but she has yet to capture the top title in the women’s division.

During Jim Cornette’s Drive-Thru, they listed off several bullet points about AEW and how Cornette feels about them. Britt Baker came up, and Cornette didn’t have the greatest review.

“Britt Baker, talk about, you know she may have plummeted the worst in this horserace that has been this… [laughs] the horses are running backwards, because we see its ass first — that has been this hysteria of AEW.”

“I started out saying, ‘why aren’t they making this girl the champion? She’s a babyface. She’s attractive. She’s a professional. She’s a dentist. She can do media. She can have all the little girls out there, the little Bakerettes looking up to her… why not make her a babyface and put her over when they were beating her constantly, as she was a babyface and they were beating her constantly, blah blah blah.”

“So, she went from the penthouse to the outhouse in the course of a year.”

Jim Cornette did not mention Baker’s unsanctioned match at all. Perhaps he hasn’t had the time to watch, but it might change his opinion about which house Britt Baker is currently in.

Baker isn’t the only person on the AEW roster that Jim Cornett has negative feelings toward. He recently had quite an online beef with Miro over comments he made about Penelope Ford.

wpDiscuz
33
0
Would love your thoughts, please comment.x
()
x
| Reply
Report this comment
You are going to send email to
Move Comment