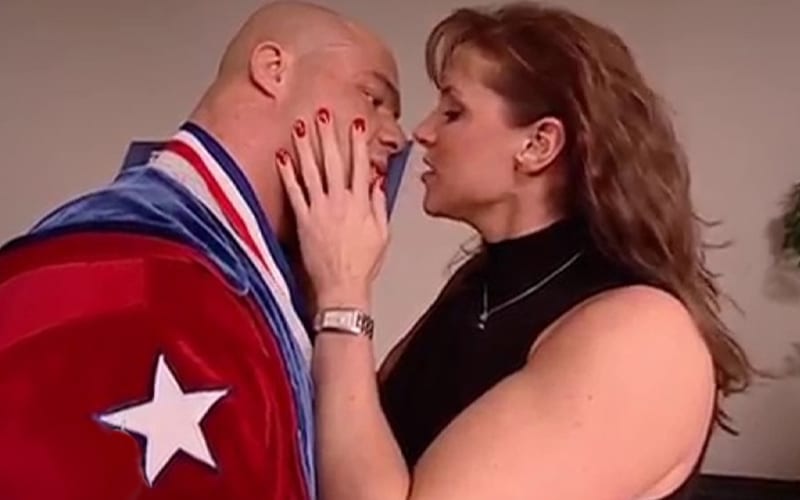 WWE has included many romantic angles in the history of the company. Stephanie McMahon and Kurt Angle’s little tease could have caused some real heat, and Angle wanted to avoid that.

During the Kurt Angle Show, he discussed the WWE angle he had with Stephanie McMahon where they got a little close. A romantic angle was teased, and they wanted to upset Triple H over it. The problem was that Angle apparently didn’t want to go as far as Stephanie McMahon.

“I remember, you know, before the match, we were planning on what to do, and I didn’t know how we were going to celebrate. If we wanted to piss off Triple H, we had to do something that would be offensive towards him. So, I told her, ‘Why don’t we hug each other, fall down and roll around the mat, you know, just roll together while we were holding each other.”

Kurt Angle didn’t want to upset Triple H, especially given the situation that he was in with Stephanie McMahon. It was certainly a tough spot to be in, but he got through it.

“And she was like, ‘No, pick me up and let me wrap my legs around you and celebrate. And I was like, ‘Oh, sh**, you know, this is Triple H’s fiance, wife, whatever she was at that particular time, but, you know, it was a bit, it was confusing for me because I didn’t want to get involved with somebody, you know, who obviously had a real boyfriend or husband in the business and to do this Angle was really new to me and different.

I didn’t want to piss anyone off. It was a really difficult spot to be in.”

Kurt Angle and Stephanie McMahon had fun with the angle and it obviously didn’t cause a breakup between her and Triple H. We’ll have to see if Angle ever makes a WWE return so they can pick things up where they let them. If anything, it’s an interesting memory for Kurt Angle to share years later.