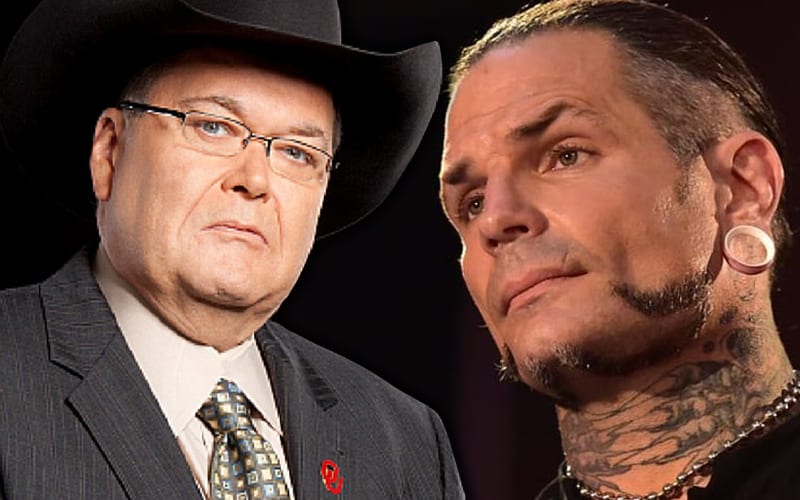 Jeff Hardy remains one of the most popular Superstars to have ever stepped foot inside a WWE ring. However, his long history with substance abuse is well-documented and it has landed him into trouble several times throughout his carer.

While speaking on the Grilling JR podcast, WWE Hall Of Famer Jim Ross talked about WrestleMania XX. During that time, Ross also discussed what ultimately led to Jeff Hardy leaving WWE back in 2003.

Jim Ross stated that Jeff Hardy was in denial regarding his substance abuse issues. In fact, Ross had a proper talk with Hardy at a TV taping and told him to go to rehab to get better.

Ultimately, Jeff Hardy didn’t go to rehab and was released by the company.

“Total denial. Jeff was in total denial. Like a lot of substance abusers, he just didn’t perceive that he had a big problem. It’s nothing I can’t handle. And so, you know, I remember sitting down and talking with him at a TV after the drug test and so forth, and him appearing to be affected, not in the right frame of mind, you know, on whatever pills he was taking.”

“And I said, you know, ‘We have this theory here, we either solve problems, or we eliminate them. The way we are going to solve your problem, if you agree, is that we are going to send you to rehab and help you with your (problem). Why are you doing this? Why are you purposely valuing getting high over your career? You are not going to make any money getting high. You can make a lot of money as Jeff Hardy the Superstar.”

“And he was getting a singles opportunity coming up; he had great charisma, as we all know. Phenomenal performer. He said, ‘I’m not going to rehab.’ I said, ‘Is that your final answer? Do you want to think about this? Get back to me later today because we have got to decide today.’ ‘No, I’m not going.’ Alright then. Basically, what you’re telling us is that you’re done because we can’t continue this way. It’s not an option. We just can’t do it. So, you know, he was wrecking corvettes, and he was missing death—multiple times.”

Jeff Hardy would have another incident where his demons got the best of him. At the now infamous Victory Road 2011 pay-per-view. Hardy was totally wasted while coming down to the ring for his match.

Thankfully, Hardy would get his life back on track and is currently a WWE Superstar once again. We hope Hardy continues to be better for himself and his family.