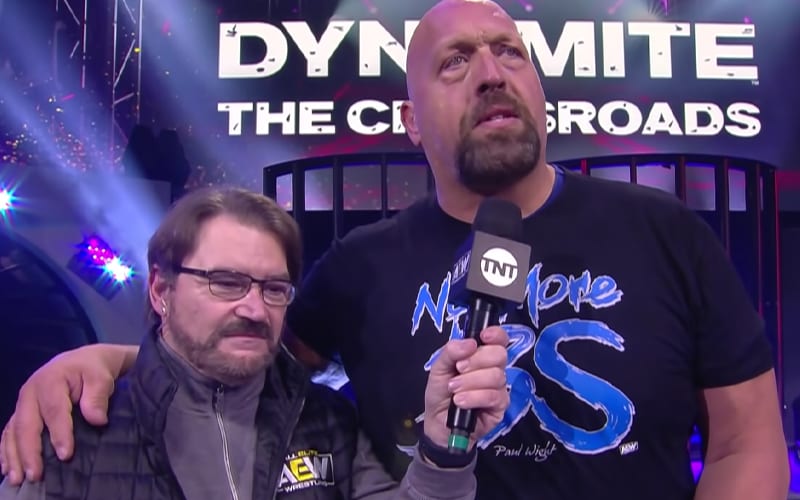 Paul Wight’s first appearance on Dynamite was a big moment, but it wasn’t perfect. The former Big Show called “Revolution,” the upcoming pay-per-view, “Evolution” by mistake. Of course, Evolution is WWE’s all-female event that they refuse to run a sequel for.

During Oral Sessions with Renee Paquette, Paul Wight brought up this botch. He explained that the reaction backstage in AEW was worlds different from the one he would have received in WWE. He also did his best Vince McMahon impression while revealing what The Chairman would have likely said.

This was brought up how Paul Wight explained that, for the first time in twenty years, he doesn’t have to knock on someone’s door to get permission about his own career. AEW is very different from WWE in many ways, including the management.

“You have any idea how unreal that feels? It’s ridiculous, like even the simple fact that the other night I called ‘Revolution,’ ‘Evolution.’ You know, because Elevation is the name of the show I’m doing and there’s a lot of tongue twisters thrown in there.”

“Nobody jumped my ass. I didn’t have somebody: ‘OH YOU STUPID! YOU DON’T KNOW THE NAME OF THE GODDAMN PAY-PER-VIEW?! NOBODY’S GONNA BUY IT, AND IT’S YOUR FAULT!'”

Paul Wight then went on to explain how much of a perfectionist Vince McMahon is, and he holds everyone around him to that standard as well. It might be difficult working for a man like that, but he did give WWE credit for helping him grow as a performer.