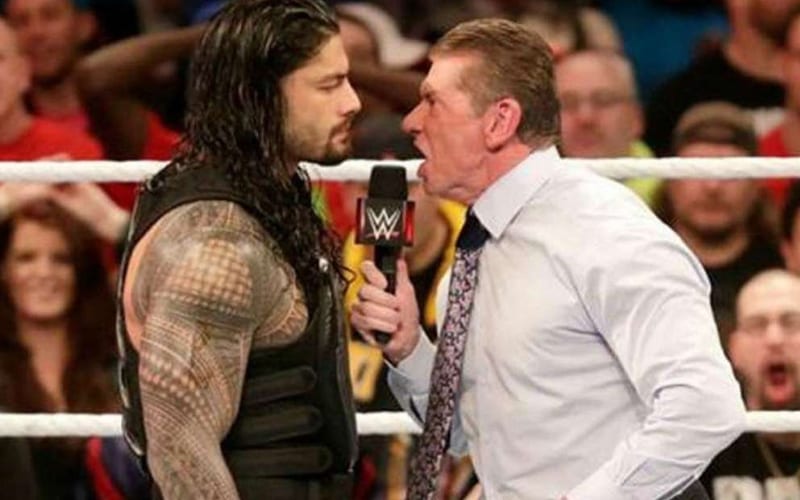 Roman Reigns knows his way around the pro wrestling ring and he needs to proper gear to do that. He is quite opinionated about his gear, but he’s not the only one.

While speaking to Complex, Roman Reigns went sneaker shopping while going over his own gear with the camera. He said that there was one combo of white soles on his shoes, but Vince McMahon didn’t like the look of that at all.

“No, I didn’t expect all the sneakerheads to come out and really kind of see that and talk about it. The main thing for me is the regular boots that I wear, they come up a bit higher. They’re like an eight-inch, nine-inch that comes up right below the calf.”

“I had to kind of put in ankle braces and make it work for me for the performance. But, man, they felt good, they felt lighter. The sole was a bit more cushiony. Those Nike boots are nice, too, that I wear. But, man, the white soles, I think that’s a classic look. I don’t think it’s ever going out of style.”

“I pretty much matched up my soles because I’ll wear different colors with the black. I had white on the vest and gloves and stuff, and they had a white trim on it. I matched it up [with white soles] and I thought it looked sweet! One person didn’t and he’s a very important person, so…”

Vince McMahon calls the shots in WWE so what he says goes. If he doesn’t like the look of someone’s gear he’s not shy about saying something, even if he’s talking to Roman Reigns. That won’t keep the Tribal Chief from having his own preference.